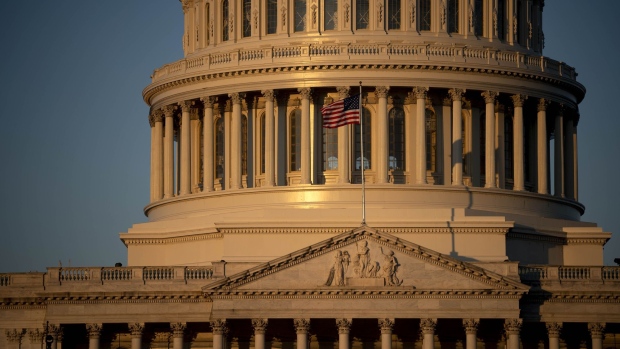 An American flag flies outside of the U.S. Capitol. Photographer: Andrew Harrer/Bloomberg , Bloomberg

(Bloomberg) -- The Senate voted to restrict President Donald Trump’s ability to take military action against Iran, with several Republicans joining Democrats to approve a measure that would require express congressional approval before a strike.

The resolution, introduced by Democratic Senator Tim Kaine, bars U.S. troops from engaging in hostilities against Iran or any part of its government or military, unless Congress declares war or specifically authorizes the use of military force. The president said he will veto the legislation.

The resolution was adopted on a 55-45 vote and next goes to the Democratic-led House, where it’s expected to be approved. Thursday’s Senate vote fell short of the margin that would be needed to override a Trump veto.

Republican senators Mike Lee and Rand Paul signed on as cosponsors of the measure last month after a briefing by Trump administration officials about the drone strike that killed Iranian General Qassem Soleimani in early January. The two senators said the explanation from officials, including Secretary of State Michael Pompeo, was inadequate and condescending.

Lee opposed one of several attempts by GOP colleagues to sink or weaken the legislation by amending it on the Senate floor. The Utah Republican said the “military-industrial complex” has grown too powerful during the country’s longest period at war. He said measures like the Kaine resolution will clarify that it is Congress’s responsibility to debate and declare war.

“We’ve been lied to by the Pentagon for years regarding a war that’s gone on two decades,” Lee said. “We don’t want additional ambiguities, we don’t want any more war.”

Lee and Paul were joined by fellow Republicans Susan Collins of Maine and Todd Young of Indiana, who signed on to the measure after Kaine removed direct references to Trump and the Soleimani strike. Kaine said Wednesday the resolution is “not directed toward President Trump,” but rather to the executive branch in general.

Kaine has said that the resolution would not prevent the president from taking action to defend U.S. troops in harm’s way or to take defensive action against an imminent threat.

“While the president does and must always have the ability to defend the United States from imminent attack, the executive power to initiate war stops there,” Kaine said. “An offensive war requires a congressional debate and vote.”

The president would veto the resolution, according to a Wednesday statement from his administration that called it “untimely and misguided.” Kaine’s resolution was drafted several weeks ago and is no longer relevant since the U.S. is not currently engaged in any hostilities against Iran, the statement said.

To contact the editors responsible for this story: Joe Sobczyk at jsobczyk@bloomberg.net, Anna Edgerton