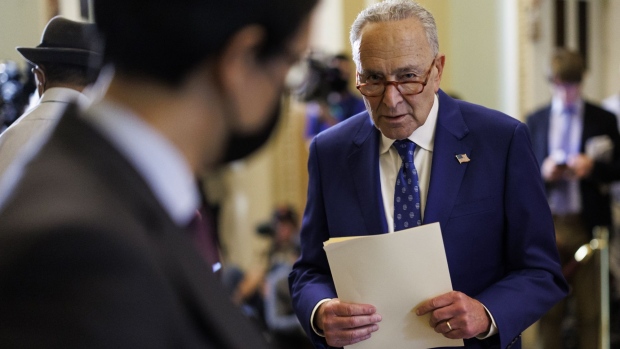 Senate Majority Leader Chuck Schumer, a Democrat from New York, departs a news conference following the weekly Democratic caucus luncheon at the US Capitol in Washington, D.C., US, on Wednesday, June 22, 2022. The Senate voted 64-34 to advance bipartisan gun-safety legislation Tuesday hours after negotiators announced they had reached a deal, with final passage likely later this week. , Bloomberg

(Bloomberg) -- Majority Leader Chuck Schumer said the Senate remains on track to begin votes on a landmark tax, climate and drugs bill Saturday despite lingering questions about how the Senate parliamentarian will rule and unresolved talks on drought relief money.

Schumer said that while his last-minute deal with holdout Senator Kyrsten Sinema meant dropping a plan to narrow a tax break for private equity, Democrats are fully behind a new $74 billion, 1% excise tax on stock buybacks that was added to the bill.

“I hate stock buybacks. I think they are one of the most self-serving things that corporate America does,” Schumer, a New York Democrat, said at a news conference Friday. “I would like to abolish them.”

Schumer said the new buyback tax more than makes up for two changes that Sinema demanded: removing a provision to narrow the carried interest loophole that benefits hedge fund managers, and scaling back the 15% corporate minimum tax.

The corporate minimum tax, Schumer said, raises $55 billion less with a carve-out that exempts depreciation tax deductions and now brings in $258 billion instead of $313 billion. The removal of the carried interest provision cost the bill $13 billion.

“We had no choice,” on carried interest, Schumer said, because Sinema threatened to oppose the bill unless the change was removed.

Sinema’s spokeswoman, Hannah Hurley, said in a statement Friday that the Arizona Democrat was concerned that “disincentivizing investments in Arizona businesses would hurt Arizona’s economy and ability to create jobs.”

Democrats need support from every member of their caucus to push the legislation through the 50-50 Senate using a fast-track budget process that requires on a simple majority vote.

The House plans to return to Washington to vote on the bill on Friday Aug. 12, Majority Leader Steny Hoyer announced.

The bill will include new drought relief provisions favored by Sinema, but Democrats are still working out the details, Schumer said.

Democratic senators from Arizona, California, Nevada and Colorado are involved in closed-door talks with West Virginia Senator Joe Manchin about a pot of $5 billion or more for the Bureau of Reclamation to address drought in their states.

The bureau would use the money to buy private water rights and help municipalities with conservation projects to increase the level of water in the Colorado River system, a Senate aide said.

Talks revolve around the level and allocation of funding, and the Western senators are insisting the drought be addressed in the climate bill, the aide said.

On stock buybacks, Schumer said he does not know what date the tax would go into effect, which may affect how companies and markets react.

The Senate’s top rules official will soon decide which parts of the tax, climate and drugs bill comply with strict Senate rules that require only fiscal items related to the budget may be included in the fast-track reconciliation package.

Senate parliamentarian Elizabeth MacDonough is expected to rule later Friday on the drug provisions, which would allow Medicare to negotiate drug prices for the first time, cap out-of-pocket costs for seniors and penalize companies that raise drug prices higher than inflation.

Schumer said he is “confident” that the “core” of the bill will remain intact after the parliamentarian review.