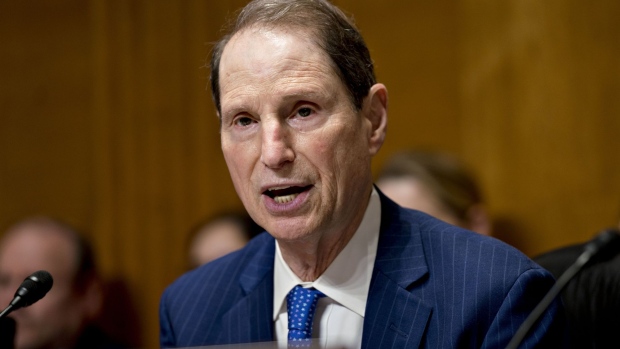 Senator Ron Wyden, a Democrat from Oregon and ranking member of the Senate Finance Committee, makes an opening statement during a hearing with Robert Lighthizer, U.S. trade representative, not pictured, in Washington, D.C., U.S., on Tuesday, June 18, 2019. President Donald Trump's top trade envoy will be in the congressional hot seat for two days this week, giving lawmakers the chance to grill him about the prospects for a deal with China, as well as various punitive measures threatened by his boss. , Bloomberg

In a June 30 letter sent to trade adviser Peter Navarro, Senator Ron Wyden -- an Oregon Democrat who sits on the Finance Committee with jurisdiction over trade -- said the claims made by former national security adviser John Bolton “are troubling, particularly because they fit a pattern of President Trump using his office for his own political gain.”

In a book officially released last week, Bolton wrote that Trump asked Chinese leader Xi Jinping at a dinner in 2018 to prioritize purchases of American agricultural products in order to boost his chances to get re-elected in November. The president and his Cabinet members have denied those allegations.

Wyden asked whether he recalled Trump expressing to a foreign official the importance of Chinese purchases of soybeans, wheat, or other agricultural products to his electoral interests and to provide details on interactions between the president and Xi at two international summits.

“Even before Bolton’s allegations surfaced, there was disturbing evidence that trade negotiations with China were being used for advance Trump’s personal interests,” the senator wrote. “I was critical of the initial China trade deal, because it appeared to prioritize the sale of soybeans from the electorally important states in the Midwest over more foundational issues like addressing intellectual property theft, forced technology transfers, and economic espionage.”

Because the phase one trade deal’s chapter on agricultural-purchase targets is classified, there is little transparency over the exact products and figures the two countries agreed on in the negotiations.

Wyden asked Navarro to describe how each subcategory of purchase obligations was determined and whether electoral politics factored into it. He said the answers were necessary “to assure the public that the agreement did not prioritize agricultural products from electorally important states for the benefit of President Trump.”

The letter states that he expects a response no later than July 14. An aide to Senator Wyden said U.S. Trade Representative Robert Lighthizer will have to submit answers on the allegations as well in questions for the record the committee will send to him.

Lighthizer told lawmakers during a hearing this month that the claims were “totally untrue” and that he would have recalled the incident if it had happened in a meeting that he attended.