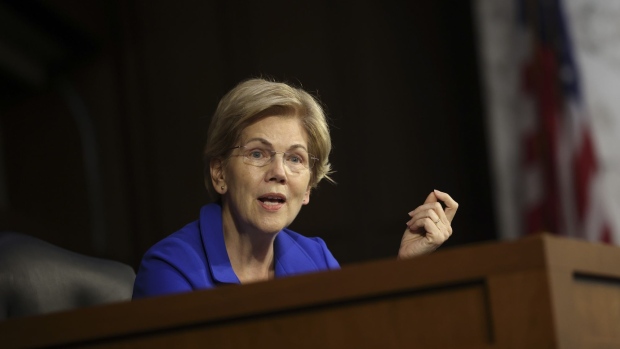 (Bloomberg) -- US Senator Elizabeth Warren rebuked Federal Reserve Chair Jerome Powell for withholding information on trading by central bank officials during the pandemic and said an investigation into the matter by the Fed’s inspector general was “troubling.”

The IG report “raises new concerns about the reasons why you continue to withhold key information about Fed officials’ financial trading activity from Congress and the public,” the Massachusetts Democrat said in a letter to Powell released Thursday.

Warren –- a member of the Senate Banking Committee that has Fed oversight authority -- also sent letters to all 12 reserve banks asking for securities transaction records for all senior officials since Jan. 1, 2020, giving the banks an Aug. 25 deadline.

Spokespeople for the Federal Reserve Board of Governors and the Dallas Fed declined to comment.

Warren’s request to the Board and reserve banks marks growing dissatisfaction with the central bank’s responses to its main oversight body in Congress. This week Republican members of the Senate Banking Committee, in response to a separate matter in which the Fed refused to share documents with lawmakers, vowed to create legislation that will compel the Fed to disclose certain information to Congress.

Though Republicans and Democrats have sought different information from the Fed, both sides have expressed frustration at being stonewalled following repeated requests.

Warren’s criticism centers around financial disclosures for 2020 that revealed trading by some officials during a time when the Fed was intervening in nearly every significant credit market to try and buffer the economic downturn brought on by the pandemic. The reserve bank officials included Dallas Fed President Robert Kaplan and Boston Fed President Eric Rosengren, who have since resigned.

“My ongoing concerns about the culture of corruption at the Fed have become more extensive with each new revelation, and with each additional failure by the Fed to provide the information needed by Congress and the public,” Warren wrote.

While the 12 reserve banks are exempt from Freedom of Information Act requests, including from lawmakers, the Board is not. Warren and Republican Senator Pat Toomey both said they have requested information from the Board directly multiple times and haven’t received what they deem appropriate responses. Senate Banking Committee members have expressed interest in making reserve banks subject to FOIA.

“Unfortunately, obstructionism has become too common a response from the Fed and regional Fed banks -- which, after all, are creatures of Congress -- to congressional oversight inquiries from members in both parties,” 11 Republican members of the committee wrote in an Aug. 9 letter to Powell.

The 2020 transactions by some Fed officials highlighted the central bank’s weak internal oversight and dated rules. Powell ordered a review of the rules and the Fed has since adopted strict limits on how senior officials can invest.

The Fed Board requested that the IG investigate transactions by Kaplan, Rosengren, as well as former Vice Chair Richard Clarida. The Fed IG independently also reviewed transactions by a Powell family trust.

The IG cleared Clarida and Powell, saying there was no evidence that they “violated laws, rules, regulations, or policies related to trading activities.”

Warren raised several concerns about the inspector general’s report on Powell and Clarida, which came in the form of a July 11 “memorandum.”

The senator noted that the IG report, for example, didn’t address “the fact that the Board of Governors’ ethics unit issued a warning against unnecessary trading to Fed officials on March 23, 2020” even while some officials made trades.

“These gaps in the review and the IG’s credulous acceptance of explanations for clearly improper behavior render the findings of the IG’s report simply not credible,” Warren said in her letter to Powell.

Bloomberg News has requested the specific dates of the transactions through FOIA and was denied.

Rosengren’s disclosure listed stakes in four separate real estate investment trusts and disclosed multiple purchases and sales in those and other securities. Those investments raised concerns because he had publicly warned about the risks in commercial real estate.

Some REITS also hold mortgage-backed securities to gain exposure to real estate assets. The Fed bought hundreds of billions of agency-issued MBS during the pandemic to help with market functioning.

Both Kaplan and Rosengren resigned in 2021 after the trading revelations. Kaplan said the disclosures risked becoming a distraction for the Fed, so he was retiring. Rosengren said he resigned due to a health condition.