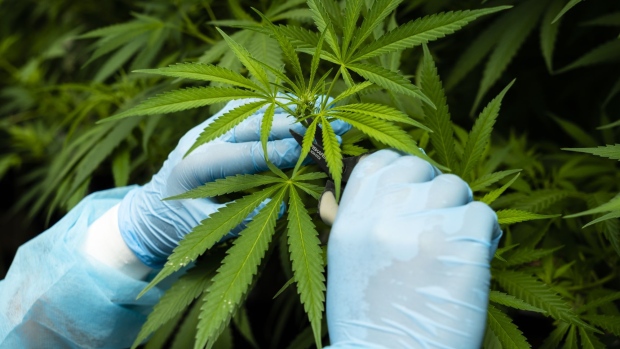 Senator Jeff Merkley, a Democrat from Oregon, speaks during a news conference for the Big Oil Windfall Profits Tax Act near the U.S. Capitol in Washington, D.C., U.S., on Wednesday, March 30, 2022. Legislation to revoke Russia's regular trade status with the U.S. remains stalled as Democrats scramble to reach a deal with GOP Senators. , Bloomberg

(Bloomberg) -- Senate backers of marijuana banking legislation are making a last-ditch bid to get it passed this year on a government funding bill, but its chances and support are dwindling.

Senator Jeff Merkley, the lead Democrat sponsor on the bill, told reporters Wednesday that he would try to get the SAFE Banking Act attached to the spending bill Congress is working on ahead of a Dec. 16 deadline to keep the government operating.

The legislation, sponsored by Merkley and Republican Senator Steve Daines, would prohibit federal banking regulators from penalizing banks and other depository institutions for providing services to legal cannabis businesses.

“I’d like to get SAFE banking done, the omnibus is another option,” Daines told reporters Wednesday, referring to the full-year spending bill. “We’re having conversations with House and Senate colleagues and looking to see if there’s a path forward, stay tuned.”

The cannabis bill has nine Republican cosponsors in the Senate, but Democrats would need the support of at least 10 to avoid a filibuster.

Senator Cynthia Lummis, one of the Republican co-sponsors of the bill, told reporters Wednesday that she doesn’t want the measure to ride on the spending package.

“When you get down to the last few weeks, like this, if those bills haven’t had the strength and the legs on their own to get time on the floor, the idea of attaching all of that to an omnibus that nobody gets to see before they vote on is truly offensive to me,” Lummis said.

The House passed its version of the bill last year with a bipartisan 321-101 vote. With little time left in this session of Congress, there won’t be much opportunity to bring the bill to the floor for a vote on its own. Merkley expressed skepticism that this could be an option.

Merkley along with a bipartisan group of senators had been negotiating to include a version of the marijuana measure in the National Defense Authorization Act, but it was left out of the text released Tuesday night amid opposition from Senate GOP leader Mitch McConnell.