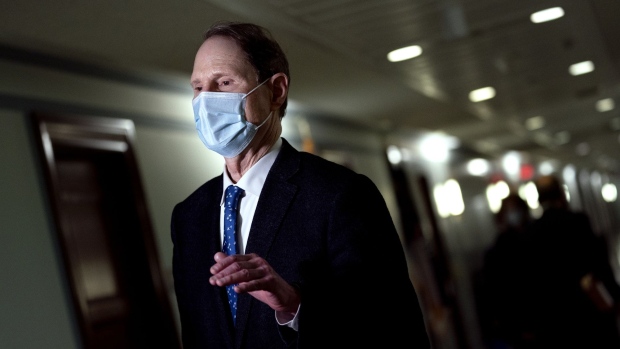 Senator Ron Wyden, a Democrat from Oregon and ranking member of the Senate Finance Committee, speaks to members of the media before a committee executive session in Washington, D.C., U.S., on Friday, Jan. 22, 2021. The committee is meeting to vote on advancing Janet Yellen's nomination to be treasury secretary. , Bloomberg

(Bloomberg) -- The two groups of senators who were battling over how to word a section of the infrastructure bill that would impose new tax rules for cryptocurrencies say they are nearing a compromise, but the deal may come too late to get added to the Senate’s infrastructure bill.

An agreement would resolve a days-long dispute that pitted the White House against Senate Finance Committee Chairman Ron Wyden over the best way to require cryptocurrency entities to report transactions to the IRS.

Wyden, along with Republican Senators Pat Toomey and Cynthia Lummis, had offered one approach that had the support of the cryptocurrency industry. A competing amendment, sponsored by Republican Senator Rob Portman and Democrats Mark Warner and Kyrsten Sinema, was the White House’s preferred option.

“We are still talking,” Wyden said, declining to discuss what issues still are unsettled.

The last minute frenzy to reach a deal may prove to be fruitless if the senators are unable to get the amendment called up for a vote. The Senate has been deadlocked for days over addressing more changes to the bill because of disputes between lawmakers about which amendments to consider and how long to continue debating. Any single senator can block an amendment from getting a vote.

“I don’t know if they will allow, the floor managers and the leadership, will allow us to offer our amendment in the second 30 hours, but we’re going to find out,” Lummis told reporters Sunday, referring to a 30-hour debate time period beginning Sunday night before the lawmakers will vote on final passage of the infrastructure bill.

The 30-hour period in which the amendment would need to get a vote is set to expire early Tuesday morning, though lawmakers could unanimously agree to cut off debate earlier.

If a compromise can’t be reached or an amendment doesn’t get a vote, the original language in the legislation, would remain. The provision has been criticized by cryptocurrency investors and Twitter Inc. chief executive office Jack Dorsey for being overly broad and requiring some crypto-related businesses -- like miners or software developers -- to report to tax collectors data that they don’t have access to.

However the legislation still has to clear the House, which can make changes in whatever ultimately passes the Senate this week. That would give lawmakers another chance to modify the provision.

Lummis said the deal under discussion refines the definition of crypto brokers required to report transactions and specifically exempts some entities from the reporting rules. The compromise would also address some concerns that the language would give preference to the crypto mining activities that are least climate-friendly because they use the most energy, she said.

Warner said the Treasury Department had been involved in the drafting of the latest amendment, a signal that the new wording will have the backing of the White House.

The issue has been a rare spot of bipartisan attention and agreements with both conservative Republicans and progressive Democrats interested in finding ways to create more oversight of the new technology.

“The idea behind the amendment in the bipartisan deal is simply to level the playing field on reporting,” Senator Elizabeth Warren, a Massachusetts Democrat, said Sunday. “It’s not a direct tax on crypto, it’s simply a reporting requirement that’s in place everywhere else. That seems like the right approach.”