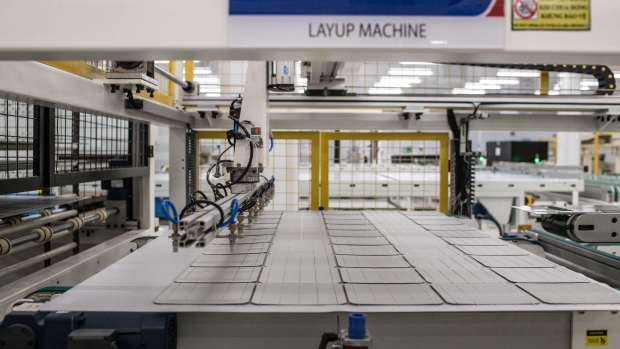 Photovoltaic cells pass through a layup machine at Irex Energy JSC's manufacturing facility in Vung Tau, Vietnam, on Monday, July 15, 2019. After U.S. President Donald Trump slapped higher tariffs on China, production in neighboring Vietnam went into overdrive. Chinese manufacturers, who face a 55% U.S. tariff on their goods, relocated some production to Vietnam, while local businesses saw a jump in orders. In June alone, U.S. imports of solar cells from Vietnam surged 656% from a year ago. , Bloomberg

The investigation into whether Chinese companies are circumventing decade-old tariffs by assembling solar cells and modules in Southeast Asia “will severely harm” American businesses and workers “as long as it continues,” the 22 senators said in a letter to Biden.

The group, led by Democrats Jacky Rosen of Nevada, Martin Heinrich of New Mexico and Kyrsten Sinema of Arizona, asked the Biden administration to quickly make a preliminary determination on the matter, rather than waiting until an Aug. 30 deadline to issue its initial findings. That could limit the domestic impact from the investigation and neuter the threat of retroactive tariffs on panels imported from Cambodia, Malaysia, Thailand and Vietnam, which represent some 80% of imported supply in the U.S.

For now, the mere existence of the probe has chilled development, with a survey by an anti-tariff industry group showing 83% of solar companies have been notified of canceled or delayed panels. New tariffs could mean “massive price hikes for U.S. utility customers,” delays in deploying clean energy and halted projects, the senators said.

The American manufacturer that successfully persuaded the Commerce Department to open the probe, San Jose, California-based Auxin Solar Inc., argues the U.S. must enforce its trade laws to combat “pervasive backdoor dumping” and rebuild the American solar supply chain. Tariff supporters argue that it’s essential for the U.S. to counter China’s dominance in solar manufacturing and not be cowed by what they call exaggerated industry claims of domestic disruption.

The investigation now underway is apolitical by design, following parameters developed under a 92-year-old U.S. trade law. White House officials have steadfastly refused to get involved, stressing the probe is a quasi-judicial process meant to be independent.

The latest push from senators follows a plea by California Governor Gavin Newsom for “immediate action” to resolve the probe “and restore certainty to the market.” In a letter last week to Commerce Secretary Gina Raimondo, Newsom said the probe is hindering California’s work to combat climate change and threatens the state’s ability to maintain energy reliability as some power plants are retired.

“We need to accelerate -- not slow down -- the deployment of clean energy and storage projects,” Newsom wrote.