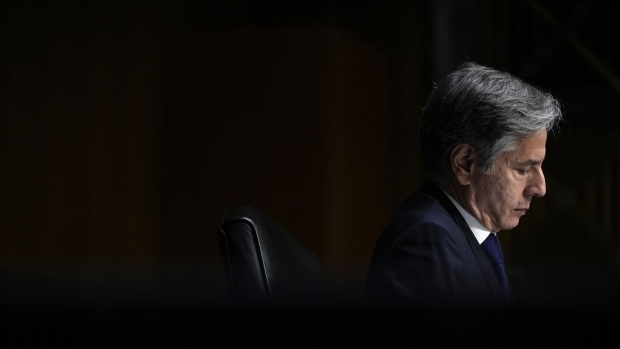 (Bloomberg) -- A bipartisan group of senators pressed Secretary of State Antony Blinken to name a point person to lead an investigation into reports about “Havana Syndrome,” a mysterious phenomenon causing diplomats and other U.S. officials to get sick at some overseas posts.

The senators “remain concerned that the State Department is not treating this crisis with the requisite senior-level attention that it requires,” they said Thursday in a letter to Blinken. “We continue to hear concerns that the Department is not sufficiently communicating with or responding to diplomats who have been injured from these attacks.”

The request from lawmakers comes after Pamela Spratlen, the State Department official in charge of the investigating the issue, left her post in September and amid fresh reports that diplomats and their families have been affected by the unexplained syndrome, which was originally reported by diplomats in Cuba.

The senators -- who include Bob Menendez, a New Jersey Democrat and chairman of the Foreign Relations Committee, and Jim Risch of Idaho, the panel’s top Republican -- wrote they were also concerned that the State Department was not working with other agencies to identify the cause and source of the attacks or to develop a plan to hold accountable those responsible. The letter was also signed by Senator Jeanne Shaheen, a New Hampshire Democrat who has been involved in the issue.

“We are extremely alarmed that reports of these incidents continue to grow,” the senators wrote. “It is clear that this threat continues to target U.S. diplomats and related personnel, and reflects a significant, unmitigated threat to our national security.”

The senators also urged the secretary to implement legislation signed into law by President Joe Biden last week to compensate victims of the attacks.

The syndrome has affected U.S. diplomats and intelligence officials at several embassies, who describe feeling ill and other unusual physical sensations after hearing strange sounds. A flight carrying Vice President Kamala Harris to Vietnam from Singapore was delayed in August by a few hours due to concerns about an “anomalous health incident” in Hanoi. The term is used by the government to describe the constellation of symptoms associated with Havana Syndrome.

State Department Spokesman Ned Price on Tuesday said Blinken has prioritized getting to the bottom of the reports, receiving briefings on Havana Syndrome from the department when he was still the nominee for secretary.