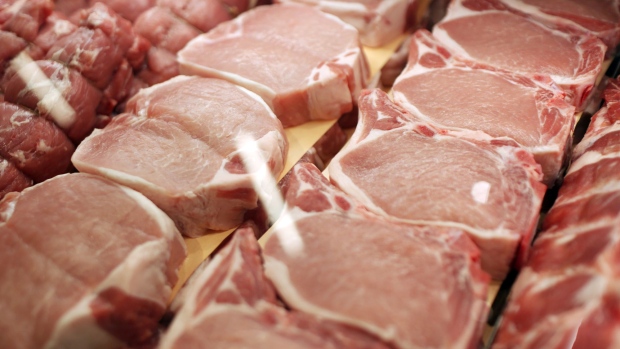 Pork chops are displayed for sale during the grand opening of a Whole Foods Market Inc. location in Burbank, California, U.S., on Wednesday, June 20, 2018. , Bloomberg

(Bloomberg) -- Two senators want the Federal Trade Commission to investigate the meatpacking industry under an obscure authority last invoked in the 1920s.

The joint resolution – to be introduced Thursday by Senators Elizabeth Warren, a Massachusetts Democrat, and Mike Rounds, a South Dakota Republican – would, if enacted, order the FTC to look into potential price-fixing, monopolization or other antitrust violations in the beef industry.

The resolution comes as consumer prices have been rising at the fastest rate in decades and congressional Democrats are seeking ways to reduce price increases, or at least avoid being blamed for them, before the November elections.

Meat prices in April were up 13.8% from a year earlier, according to the Labor Department’s Consumer Price Index.

Warren last week introduced legislation that would give the FTC and state attorneys general more power to investigate companies that charge excessive prices.

The White House has blamed meatpackers for inflation at the supermarket, alleging that the largest companies are engaged in “pandemic profiteering.”

The Warren and Rounds resolution relies on an authority within the FTC Act that allows the agency to investigate and report back to Congress on potential violations of US antitrust law. In the 1920s, Congress ordered the FTC to investigate General Electric over allegations of an electric power monopoly, and the American Tobacco Company and the Imperial Tobacco Company over their collective boycott of a tobacco growers’ cooperatives.

The Justice Department and the US Department of Agriculture have been probing rising beef prices since 2020, while New York State prosecutors began an inquiry last month.

House lawmakers have proposed installing a special prosecutor within the USDA to investigate the meat and poultry industries.