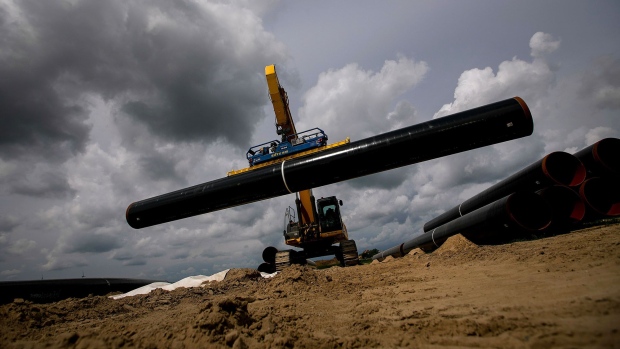 An excavator lifts a section of pipe on the European Gas Pipeline Link (EUGAL) site, a joint construction project by Sicim SpA and Bohlen & Doyen GmbH, in Gellmersdorf, Germany, on Tuesday, May 28, 2019. One of Europe's biggest natural gas users has turned decidedly pessimistic on the fuel, prompting traders to rethink their own outlook for the industry. Photographer: Krisztian Bocsi/Bloomberg , Photographer: Krisztian Bocsi/Bloomberg

(Bloomberg) -- A bipartisan group of senators is planning to introduce legislation that would expand U.S. sanctions against Gazprom PJSC’s Nord Stream 2 pipeline between Russia and Germany by taking aim at insurance companies that work with Russian vessels on completion of the project.

Senator Ted Cruz, one of the lead sponsors of the legislation, said the pipeline poses “a critical threat to America’s national security and must not be completed.” Russian President Vladimir Putin is trying to circumvent the sanctions passed by Congress last year, Cruz said in a statement.

Senator Jeanne Shaheen, a New Hampshire Democrat, said the pipeline “threatens Ukraine, Europe’s energy independence and gives Russia an opening to exploit our allies” and that “Congress must once again take decisive action and stand in this pipeline’s path.”

Shaheen and Cruz last year secured sanctions against the pipeline as part of the 2020 National Defense Authorization Act. After President Donald Trump signed the NDAA into law, AllSeas Group SA stopped work on the pipeline, bringing the project to a halt just weeks before the expected completion. Gazprom, the owner of the pipeline and the gas that’s supposed to flow through it, has now moved two Russian vessels into the area to continue work.

The U.S. is seeking to block completion of the project over longstanding concern that additional flows of Russian gas would increase the Kremlin’s political leverage over European Union countries. Washington has repeatedly urged Europe to buy more U.S. liquefied natural gas instead.

The Russian government said last year that sanctions would not derail the Nord Stream 2 project.

The bill will state that anyone involved in the project in any capacity will “face crippling and immediate American sanctions,” Cruz, a Texas Republican, said in a statement.

A draft of the measure obtained by Bloomberg spells out that previously enacted sanctions apply to all pipe-laying activities and insurance. It expands sanctions to companies that provide “underwriting services or insurance or reinsurance” for vessels working on the pipeline as well as those that provide “services or facilities for technology upgrades or installation of welding equipment for, or retrofitting or tethering” of vessels.

The bill would extend sanctions to anyone who provides port facilities to pipe-laying vessels and tethering services.

The two vessels targeted by the sanctions -- the Akademik Cherskiy and Fortuna -- each have some of the tools needed to complete the pipeline but would have to be tethered together to carry out the work, according to a person familiar with the matter.

In addition to putting pressure on the Trump administration to implement additional sanctions, the legislation may also be included in the 2021 NDAA, the person said. Shaheen and GOP Senator Tom Cotton of Arkansas, another sponsor, are both members of the Senate Armed Services Committee, which is responsible for drafting the NDAA.

Republican Senators John Barrasso of Wyoming and Ron Johnson of Wisconsin are also co-sponsoring the measure.

Richard Grenell, the former U.S. ambassador to Germany, told German business newspaper Handelsblatt on May 26 that “further sanctions meet non-partisan approval. Despite the election campaign, legislation could go ahead quickly.”

Grennell stepped down as ambassador on Monday. He also served as acting Director of National Intelligence.