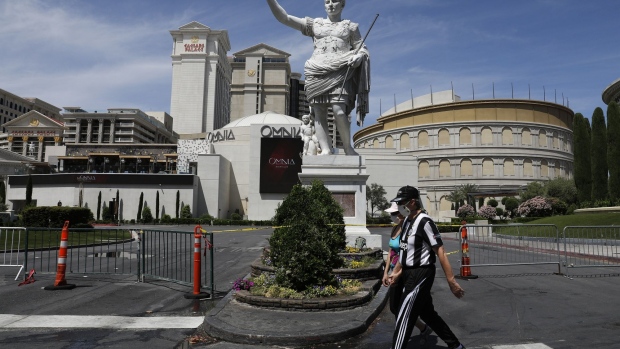 (Bloomberg) -- A bipartisan group of senators want the Federal Reserve to buy longer-term debt issued by state and local governments to help ease the impact of coronavirus on municipal services.

“State and local governments are on the front lines in the fight against Covid-19,” the senators wrote in a letter to Fed Chair Jerome Powell and Treasury Secretary Steven Mnuchin on Thursday. “These entities are quickly deploying desperately-needed funds to hospitals, public health departments, nursing homes, water and power utilities, public transit, and other essential services.”

The authors of the letter -- Democrats Bob Menendez of New Jersey and Sherrod Brown of Ohio, and Republicans Thom Tillis of North Carolina and Lisa Murkowski of Alaska -- note that “the municipal bond market has been under extraordinary stress” and that the Treasury and Fed must “ensure sufficient access to medium- and long-term capital for state and local governments.”

“Establishing a facility to purchase municipal bonds from issuers and in the secondary market across all points of the yield curve would ensure state and local governments across the country can meet their financing needs as they respond to the health crisis and lay the foundation for future economic growth,” they wrote.

The senators note that under Section 4003 of the recently passed stimulus legislation, the CARES Act, Treasury and the Fed have the authority to design such a program. At the moment, the Fed is only lending to municipalities that issue debt maturing in three years or less. Municipal debt can be sold for as long as 30 years.

This issue is coming to the fore as the two parties fight each other and among themselves about how much aid to extend to state and local governments.

House Speaker Nancy Pelosi unveiled legislation this week that would provide roughly $1 trillion to state and local governments. Senate Majority Leader Mitch McConnell has called the legislation a “Democratic wish list” and has said that state aid can’t be used by legislatures to plug deficits in pension plans for public employees.

Meanwhile, some Republicans are pushing to get help to states. Senator Mitt Romney of Utah was seen entering a recent meeting with a sign that said “Blue states aren’t the only ones who are screwed.”

And Menendez is working on legislation with Republican Senator Bill Cassidy of Louisiana that would establish a $500 billion fund for states. Menendez said during a recent press conference that other Republicans are considering signing on to his legislation.