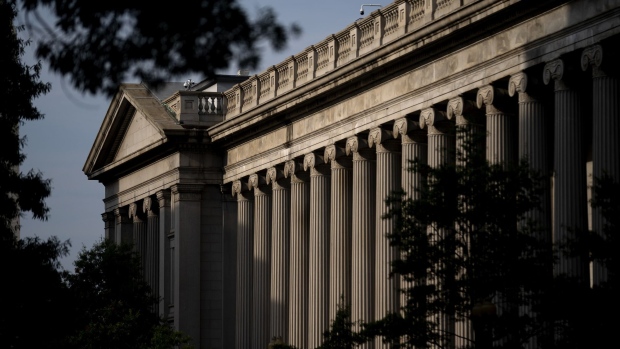 The U.S. Treasury Department in Washington, D.C., U.S., on Monday, July 26, 2021. Senators negotiating a $579 billion infrastructure package are aiming to finish negotiations early this week, under pressure from colleagues to salvage an August recess and to allow the Senate to turn to preventing a government shutdown and debt ceiling default in the fall. , Bloomberg

(Bloomberg) -- The Senate’s top Republican on the Banking Committee is dismissing the threat of the federal government defaulting on debt, arguing the Treasury would act to prioritize debt payments and delay others if necessary.

“There’s absolutely 0.0% chance that anybody wouldn’t get coupon and principal payments on U.S. debt securities on time,” Senator Pat Toomey of Pennsylvania said Tuesday in an interview with Bloomberg News. “The worst that could possibly happen is there might be some vendors who would get paid a little later than they were expecting to get paid for services they provided to the government.”

The Treasury Department has dismissed the idea of prioritization previously.

“The only way for the government to address the debt ceiling is for Congress to raise or suspend the limit, just as they’ve done dozens of times before,” Treasury spokeswoman Lily Adams said earlier this month.

But Toomey said the Treasury Department would have to act.

“We bring in enough tax revenue to easily service all our debt,” he said. “There would be a prioritization -- the Treasury doesn’t like to talk about it, but that’s only because they are afraid that increases the chances the debt limit doesn’t get raised.”

The debt limit snapped back in August after a two-year suspension. Treasury Secretary Janet Yellen has said her department would exhaust special measures sometime in October.

The House on Tuesday was set to pass another debt limit suspension attached to legislation to keep the government funded and avert a shutdown when the fiscal year ends Sept. 30. Republicans in the Senate have vowed to block the bill over the debt ceiling provision.

Toomey expects that Democrats would eventually raise the debt limit on their own closer to the moment some payments would be delayed.

“Why would the Democrats let that happen?” Toomey asked of a debt limit crisis. “When the entire government is controlled by the Democrats and the blame would come back on them? Everybody knows they have the ability to do this themselves.”

Toomey said he’s comfortable voting against ending a filibuster to block such a vote outside of a special budget process known as reconciliation.

“I am not afraid of a headline that says, you know, ‘Republicans refuse to facilitate the most irresponsible and reckless spending spree in American history.’ I’m O.K. with that,” he said.

While Senate Republican Leader Mitch McConnell has said Republicans would oppose the debt limit increase, Senator Chuck Grassley said in a separate interview he might be willing to vote for cloture to allow the Democrats to have a quick up-or-down vote on the debt limit. A few other Republicans also are considering what to do.

That happened in 2014, when a group of Republicans led by McConnell voted to end a filibuster but against the debt limit bill on final passage.

At least 10 Republicans would have to do so, however.

McConnell wants Democrats to instead have to go through a time-consuming and politically painful process of amending their budget resolution and then passing a debt limit reconciliation bill.

So far, Democratic leaders have refused to go that route, arguing the debt is a bipartisan responsibility and pointing out that they backed debt limit hikes under former President Donald Trump even though they opposed his tax overhaul and other pieces of his agenda.