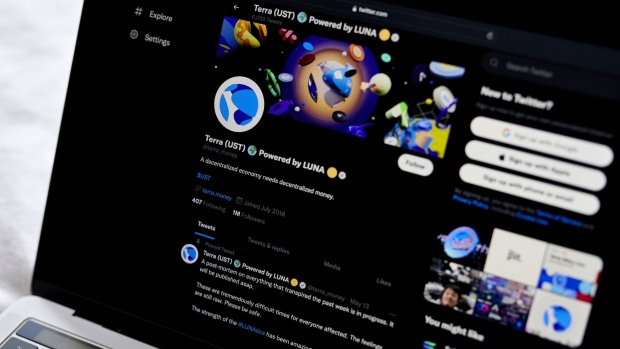 The Terra Twitter page on a laptop computer arranged in the Brooklyn borough of New York, US, on Monday, May 16, 2022. The collapse of the Terra ecosystem, and the tokens Luna and UST, will go down as one of the most painful and devastating chapters in crypto history. Photographer: Gabby Jones/Bloomberg , Bloomberg

(Bloomberg) -- Seoul police are investigating allegations that staff of Terraform Labs, the company behind the collapsed TerraUSD algorithmic stablecoin, embezzled Bitcoin holdings amassed to help defend the token’s peg to the dollar.

The Seoul Metropolitan Police Agency is investigating a report about a “suspicious” crypto wallet that may have been used to embezzle Bitcoin, an official said by phone on Thursday. It wasn’t clear whether the wallet belonged to one or several employees, and the amount of Bitcoin possibly stolen isn’t yet known, the official said.

TerraUSD crashed from its dollar peg in early May, rocking cryptocurrency markets and spawning efforts by governments around the world to more tightly regulate stablecoins. The token’s collapse, and the accompanying plunge in its sister coin Luna, wiped out some $40 billion of market value. Do Kwon, the entrepreneur behind Terraform Labs, is a South Korean native.

Read more: Bitcoin’s Most-Watched Whale Is the King of the ‘Lunatics’

The allegedly embezzled Bitcoin appears to have belonged to Luna Foundation Guard, the entity set up by Terraform Labs to maintain TerraUSD’s peg to the dollar, Yonhap News TV reported on Thursday, without citing anyone.

LFG had amassed crypto reserves that at one point reached $3.5 billion to use as a backstop for defending the link. It held 80,394 Bitcoin as of May 7 -- worth about $2.9 billion at the time -- according to a tweet from the entity. As of May 16, that hoard had dwindled to 313 Bitcoin.

Separately, South Korean prosecutors are investigating allegations that TerraUSD and Luna tokens were used in a Ponzi scheme, Yonhap News reported in late May.