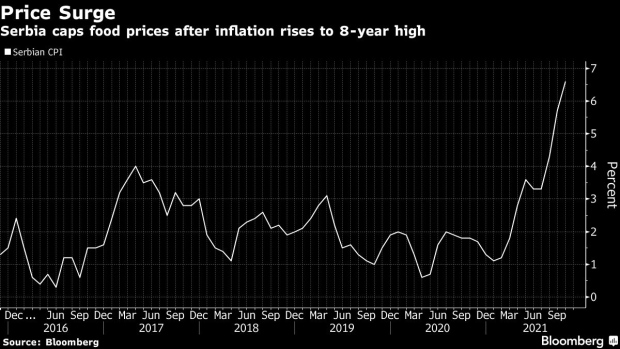 (Bloomberg) -- Serbia capped the price of some staple foods, including milk, flour and pork, as the government attempts to curb persistent price increases ahead of elections next year.

Over the next 60 days, the government will limit prices for pasteurized milk, some types of bread, pork legs, sugar and sunflower oil. Producers that cut supplies will face penalties, it said on Tuesday. Serb inflation is at the highest rate in eight years.

Global food prices are at a decade high following bad weather, labor shortages and logistical bottlenecks. That’s piling pressure on consumers and governments, with countries from Russia to Turkey introducing protectionist measures, calling for price cuts or boosting investment in local food production to secure supplies. Rabobank said this week that disruptions and prices should ease next year, but only slightly.

Serbia is trying to protect its citizens from an “excessive impact on their disposable income,” Mate Jelic, senior macroeconomic analyst at Erste Group said. “Still, such measures are only sustainable in the short term.”