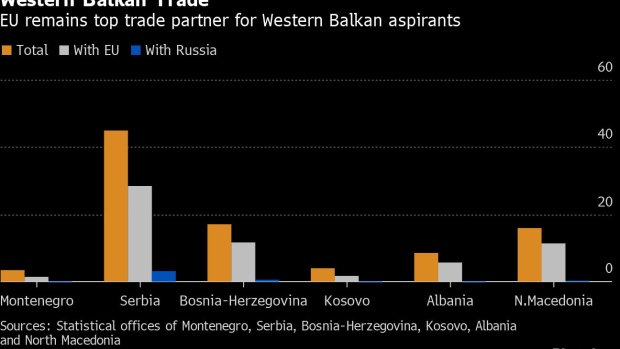 Light trails from vehicles pass along a road of queuing traffic near the Kremlin at night in Moscow, Russia on Feb. 1., 2019. After car-sharing vehicles more than tripled last year, the city now has the biggest shared fleet in Europe and the second-largest in the world. Moscow is ranked as the world’s second-worst city for traffic congestion. Andrey Rudakov/Bloomberg Photographer: Andrey Rudakov/Bloomberg , Bloomberg

(Bloomberg) -- Serbia will sign a trade pact with Russia’s answer to the European Union, doubling down on its strategy of dual East-West allegiances as the western bloc drags its feet on expanding into the Balkans.

The agreement with the Eurasian Economic Union, or EEU, has raised alarm among officials in the EU, which has for years coaxed the continent’s most volatile region closer into its orbit while refraining from finalizing memberships. But it bolsters the approach of Serbian President Aleksandar Vucic, who has vowed to lead the country of 7 million into the EU while maintaining strong ties with his close ally Russian leader Vladimir Putin, who helped create the EEU in 2015.

While the agreement offers little economically -- Serbian trade with the EU eclipses that with the five ex-Soviet EEU members -- it’s a reminder that Western inaction leaves the door open for Russian and Chinese influence.

“The EU may want to help the region, but that is different to bringing the Balkans into its own house,” said Timothy Less of the U.K. based Centre for Geopolitics and Grand Strategy. “The EU no longer has a viable plan for stabilizing the Balkans, meaning others are having to solve the problems left unfinished by the Europeans.”

Under the agreement, to be signed by Prime Minister Ana Brnabic, Serbia will broaden existing trade pacts with Russia, Belarus and Kazakhstan to add the EEU’s other two members, Armenia and Kyrgyzstan, after negotiating tariff-free sales of cheese, fruit brandies and cigarettes to the combined markets of 180 million people.

Faced with uncertainty, the western Balkan states have already committed to creating their own common market while waiting to join the EU. Serbia, Albania and North Macedonia have announced plans to bolster trade and harmonize incentives for investors, a rare show of unity after the ethnic conflicts of the 1990s. They also invited Montenegro, Kosovo and Bosnia-Herzegovina to join.

“We agreed to start working for ourselves, for our region,” Vucic said at the United Nations last month. “Everything we can do ourselves, we should and not leave it to others.”

The EU has warned that Serbia must drop any free trade pacts it has with third countries when it joins. But that will be a way off after the European Commission said it won’t open its doors to the next potential new member until around 2025.

That gives Vucic more time to strengthen ties with other political powers, a strategy that he’s pursued since taking control of the government in 2014.

He has since offset his goal of EU entry by refusing to apply the bloc’s sanctions against Russia for its annexation of Crimea from Ukraine. He has also hosted Russian troops for joint military drills, accepted the gift of Russian fighter jets and other weapons and repeatedly visited Putin in Moscow.

The Trade Ministry in Belgrade sees exports to Russia, which makes up about 90% of Serbia’s $1.1 billion in sales to the EEU, rising by 50% in three years. By comparison, Serbia sells $13 billion in goods to the EU, a discrepancy that highlights the political, rather than economic, importance of the deal with the Russian-led trade area.

“Free trade agreements are not a bad thing, but signing a free trade agreement without any parallel progress toward the EU is not a good signal,” said Miroljub Labus, former Yugoslav and Serbian deputy prime minister from 2000 to 2006. “Still, it’s a win-win agreement for both Russia and Serbia.”

To contact the editors responsible for this story: Irina Vilcu at isavu@bloomberg.net, Michael Winfrey, Andrea Dudik