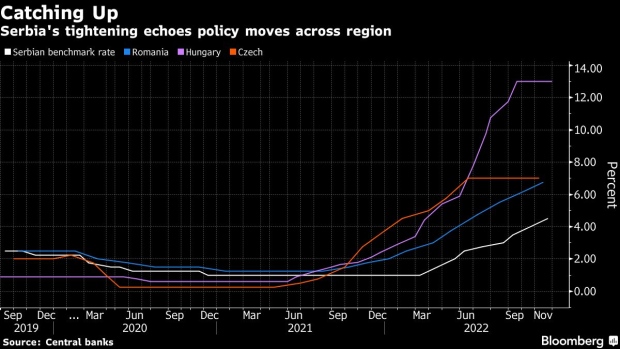 (Bloomberg) -- Serbia is likely to continue its rapid monetary-policy tightening in response to surging inflation even as the country faces a sharp slowdown in economic growth.

The National Bank of Serbia will lift its one-week repurchase rate by half a percentage-point to 5% on Thursday, according to 11 of 15 analysts in a Bloomberg survey. Four economists see a 25 basis-point increase as the expected ninth consecutive rate hike marks the fastest rise in borrowing costs in more than a decade.

“The increase could be justified by the need to prevent second-round effects from high inflation and, in the context of monetary policy tightening of the ECB and Fed, to limit the risk of capital outflows,” UniCredit SpA senior economist Mauro Giorgio Marrano, who predicts a half-point hike, said in a research note last week.

Inflation hit 15% in October, the highest rate since at least 2007, with a Bloomberg survey showing an expected peak at 15.1% in November. The central bank has said that its policy moves have limited impact on consumer prices as inflation drivers are coming mainly from abroad, most notably via energy and food costs.

But even core inflation, which excludes the most volatile items, has long exceeded the Balkan nation’s tolerance band of 1.5%-4.5%, with the gauge coming in at 9.5% in October.

Serbia’s economic growth has been slowing for five quarters, registering a 1% annual expansion in the July-August period. Overdone monetary tightening may hurt the economy and support arguments for a smaller rate increase this month, according to Generali Investment analyst Jakub Kratky.

With the peak yet out of reach and core inflation approaching double digits, the central bank “could be pressured to deliver a bit more of tightening,” Kratky said in an email. “However, the latest data pointed to a visible slowdown of growth in Serbia, so excessive tightening could choke the economy.“