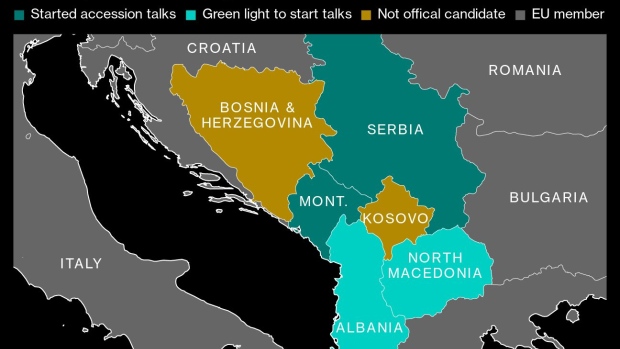 A European Union (EU) flag flies near the Europa building in Brussels, Belgium, on Tuesday, Feb. 9, 2021. Ukraine is working to introduce more transparent regulation in the natural gas industry, where it also wants to strengthen links with the European Union. Photographer: Geert Vanden Wijngaert/Bloomberg , Bloomberg

(Bloomberg) -- Serbia may take a step closer to joining the European Union on Sunday, when voters in the Balkan nation will decide on whether to change the constitution to create a more independent judiciary in line with the 27-member bloc’s standards.

Shielding judges and prosecutors from political influence is a key step in aligning the former Yugoslav republic’s laws with the EU. If the ballot measure is approved, the power to appoint and fire members of the judiciary would be taken from the government and the legislature and given to top judges and academics.

Serbia has sought EU membership for more than a decade, though the country’s dispute with its former province Kosovo, which seceded in 2008, has proved a stumbling block for accession talks. With resistance to enlargement building within the EU, Serbia’s prospects for joining seem to have dimmed.

The planned amendments, backed by the EU and the U.S., will strengthen the rule of law through a more independent judicial system and address the shortfalls of an earlier overhaul from 2009, said Justice Minister Maja Popovic, as she called for high voter turnout.

“Only an independent judiciary and an independent public prosecutor’s office guarantee citizens’ rights and legal protection in court proceedings,” Popovic said in a statement posted on the ministry’s website.

A yes vote would open the path to amending the nation’s constitution; changes would still require parliamentary approval. Polls open at 7 a.m. local time and close at 8 p.m.

The referendum will also be a gauge of support for President Aleksandar Vucic and his ruling Progressive Party less than three months before parliamentary and presidential elections due in early April. Vucic’s party won by a landslide in 2020, when mainstream opposition groups boycotted the ballot over campaign conditions.

Still, the overhaul has deepened divisions in Serbia’s already polarized politics, as opposition groups from both the left and right urged voters to reject the measure or sit out the ballot.

The new rules are a “privatization” of state powers and hands control over the judiciary to a small, unelected group, according to Sasa Radulovic, a former economy minister and euroskeptic who heads the opposition party Enough is Enough.

“People can replace lawmakers every four years, but like this, it won’t be possible to change any bad judges or prosecutors,” Radulovic told Politika newspaper on Friday. “They will keep appointing each other.”