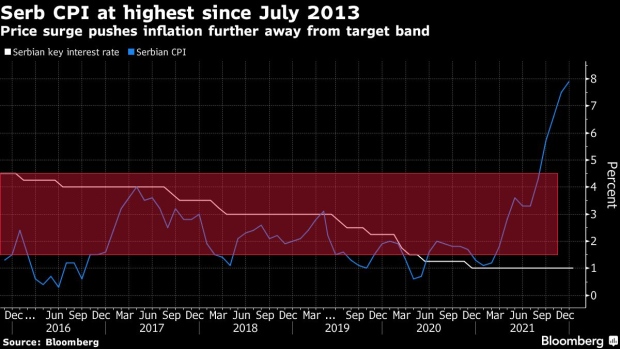 Serbia kept its key policy rate at a record low in the first policy meeting this year, avoiding an avalanche of monetary tightening in eastern Europe even as inflation eclipses the central bank’s target.

Officials left the one-week repurchase rate at a record low of 1% for a 13th straight month on Thursday, in line with the forecast of all 12 economists surveyed by Bloomberg.

Rate setters in Belgrade resisted the wave of monetary tightening in the region as core inflation has remained tame at 3.5%, even as the consumer-price index for December surged to 7.9%, the fastest in more than eight years.

The central bank said it would rely on tightening factors outside of a regime of benchmark rate hikes, while adding that it would act if inflation persisted.

“Favorable financial conditions that contribute to economic growth can be maintained even with a somewhat smaller degree of expansiveness in monetary policy,” the bank said in a statement.

Price pressures have intensified since last summer, but the central bank still sees inflation beginning to ease in the second quarter. The government has intervened by capping prices of some staple foods, which helped slow monthly inflation in December to 0.4%. Serbia’s target for annual inflation is 3%, with a band range of 1.5% above and below that level.

The first in Europe to cut rates when the pandemic hit in 2020, officials in Belgrade say they want to avoid swings in the benchmark. Instead, they’ve deployed other tools to tighten monetary conditions, phasing out repo securities auctions previously used to supply liquidity to banks, and overseeing higher rates at weekly reverse-repo tenders.

“In case risks do materialize, which would cause inflation movement above the upper limit of the tolerance band for a longer period, the National Bank of Serbia is ready to react with all instruments at its disposal in the shortest amount of time,” the bank said.

Holding off rate hikes also stems from the relative stability of the dinar against the euro. The central bank has praised its managed float of the currency as an anchor that helps keep core inflation subdued.

“The NBS will continue to fully make use of its flexible monetary approach, without changing the key rate for now,” Erste Group analyst Mate Jelic wrote in a note after the decision. “If inflation remains persistently above the upper band of the target rate” in the second half, the bank “could then opt for hikes of the key rate as well.”