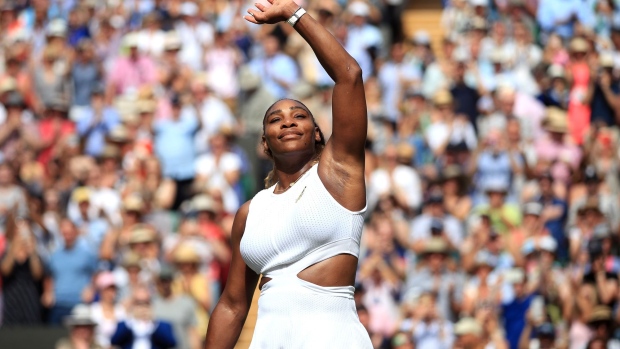 (Bloomberg) -- Serena Williams, one of the most decorated athletes of her generation, is reluctantly planning to retire from professional tennis so she can focus on growing her family.

The 23-time Grand Slam champion explained her decision in a cover story in Vogue magazine, published Tuesday. She said she didn’t want to choose between her career and having more children, but at almost 41, “something had to give.”

“I don’t think it’s fair,” Williams said. “If I were a guy, I wouldn’t be writing this because I’d be out there playing and winning while my wife was doing the physical labor of expanding our family. Maybe I’d be more of a Tom Brady if I had that opportunity.”

Williams gave no timetable for her official retirement. She suggested she will compete at the US Open, which starts later this month in New York.

“Unfortunately I wasn’t ready to win Wimbledon this year,” she said. “And I don’t know if I will be ready to win New York. But I’m going to try.”

Williams and her husband, Reddit co-founder Alexis Ohanian, have been trying to have another child in the past year, she said, after giving birth to their daughter, Alexis Olympia Ohanian, in 2017. After tennis, Williams  also plans to focus on her venture capital firm, Serena Ventures, which primarily invests in businesses started by women and people of color.

While Williams’s situation is unique, many women in the US find themselves pulling back from their careers to care for their families. A 2019 study by Pew Research Center found that 54% of working mothers said they needed to reduce their working hours because of their family life, compared with 44% of fathers.

The tennis champion wrote in a 2018 op-ed for CNN that she nearly died after giving birth after a pulmonary embolism sparked a slew of complications. Still, Williams said she could have won more titles: “The way I see it, I should have had 30-plus grand slams.”

“I had my chances after coming back from giving birth.” Williams said. “I went from a C-section to a second pulmonary embolism to a grand slam final. I played while breastfeeding. I played through postpartum depression. But I didn’t get there.”

Even without medical issues, elite female athletes have talked before about how hard it is to be pregnant or postpartum and maintain their sponsorships. Nike didn’t have a maternity leave policy for its athletes until after a 2019 report from Olympic runner Alysia Montano in the New York Times that explained how it was nearly financially impossible to be pregnant and a professional athlete.

For American women who aren’t in Williams’s financial position, the situation is even more dire. The US, unlike most other high-income countries, guarantees workers nothing if they become parents or get sick, costing Americans an estimated $22.5 billion annually in wages, according to left-leaning think tank Center for American Progress. The Family and Medical Leave Act allows some to take up to 12 weeks off if they have a baby, but it doesn’t guarantee pay or apply to those who work for small businesses or themselves.

Williams said before she had a child, she assumed she would “have people taking care of it 24/7.”

“I’m not going to lie—I definitely have a lot of support. But I’m also an incredibly hands-on mother,” she said. “In five years, Olympia has only spent one 24-hour period away from me.”

That isn’t an option for most women. The US also offers no subsidies to help pay for childcare so parents can go back to work. About 53 million people — primarily women — provide unpaid care to a family member or friend at an estimated annual value of $188 billion.

For Williams, the decision to leave tennis hinged on being able to have another child, which she said her doctors reassured her is possible.

“I definitely don’t want to be pregnant again as an athlete,” Williams said. “I need to be two feet into tennis or two feet out.”

(Updates throughout, starting in fourth paragraph.)