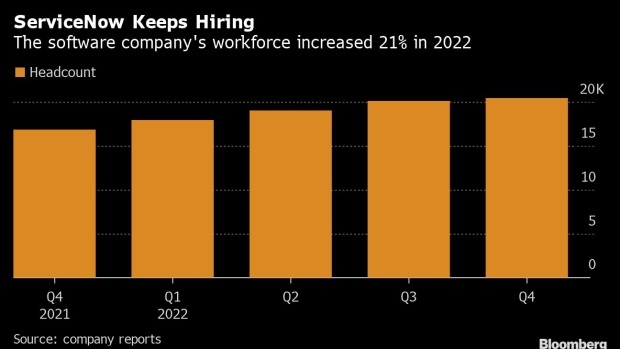 ServiceNow will have “absolutely no layoffs in 2023,” Chief Executive Officer Bill McDermott said in an interview. Last July, McDermott was one of the first software executives to say that customers were reluctant to commit to purchases. Since then, however, the company has continued to hire and now has better sales coverage across industries, he said.

Fourth-quarter subscription revenue increased 22% to $1.86 billion, compared with an average estimate of $1.84 billion, according to data compiled by Bloomberg. Total revenue jumped 20% to $1.94 billion in the period ended Dec. 31, ServiceNow said Wednesday in a statement. Profit, excluding some items, was $2.28 a share, topping analysts’ average estimate of $2.02.

The company delivered a better-than-expected subscription sales forecast for 2023, signaling that demand for its business workflow software remains strong in an uncertain economic environment.

Annual subscription revenue will increase about 23% to $8.44 billion to $8.5 billion. Analysts, on average, had estimated 21% growth. ServiceNow predicted subscription revenue, which makes up the overwhelming majority of company sales, will climb 22% in the current period ending in March, slightly above the analysts’ average projection.

The shares declined as much as 9.5% in extended trading, before paring the loss to 2.7% at 5:58 p.m. in New York. The stock dropped 40% last year, though has rallied 16% so far in 2023 and closed Wednesday at $448.77. Multiple analysts had released reports in the past few days projecting that revenue would top estimates because of improving currency exchange rates.

Currency fluctuations will moderate through the year, and probably won’t weigh on annual earnings in aggregate, according to the forecast. Currency ate up 4.5 percentage points of growth in 2022, the company said.

Current remaining performance obligations, which are contract sales that will be recognized as revenue in the next 12 months, gained 22% to $6.94 billion in the quarter. Analysts estimated $6.82 billion, according to data compiled by Bloomberg.

(Corrects the average of subscription sales estimates in the first and third paragraphs on a story published Jan. 25. The incorrect estimate was based on a faulty data input.)