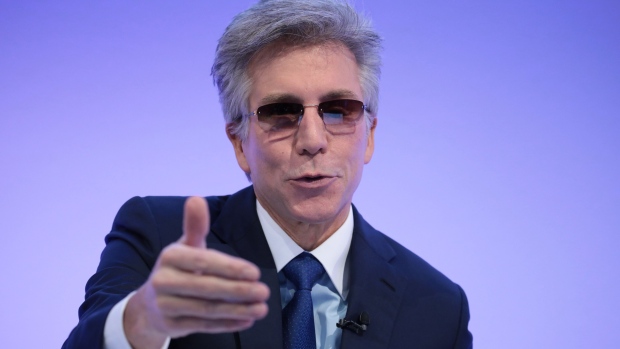 (Bloomberg) -- ServiceNow Inc. shares gained after the company reported strong sales and gave a forecast for the current quarter that met expectations, providing reassurance for investors who fear a slowdown in the high-flying software sector.

Subscription sales, which make up about 95% of total revenue, jumped 30% to $1.52 billion in the fourth quarter, the Santa Clara, California-based company said Wednesday in a statement. Those sales are expected to increase about 25% year-over-year to $1.62 billion in the period ending in March.

“The party is just getting started,” Chief Executive Officer Bill McDermott said in an interview. “The marketplace today wants something that not everyone can give them. What they want now is growth, but they also want profitability.”

ServiceNow sells applications that help companies manage and automate their basic work functions, like onboarding a new employee or addressing a worker’s technology issues. McDermott previously outlined a goal for the company to reach $15 billion in revenue by 2026 by expanding beyond its core IT market into other sectors, such as human resources, customer service, marketing and compliance.

“The sum of those parts will all be multibillion businesses as you look into the future,” McDermott said. “I’ve got growth everywhere here.”

So far, that diversification appears to be paying off. Total billings increased 33% to $2.53 billion in the period ended Dec. 31. The company said it had 1,359 customers paying more than $1 million in annual contract value, a 25% year-over-year increase. It projected subscription revenue of as much as $7.04 billion in 2022.

But the competitive environment is growing more intense, particularly as the vendor continues to try to expand its footprint with businesses. Salesforce.com Inc., Atlassian Corp., SAP SE, Workday Inc. and others are quickly becoming more significant rivals.

As a result, analysts are increasingly weighing whether a major acquisition will be needed to help bolster ServiceNow’s share in areas where it is far from the leader, like monitoring system performance across a company’s IT infrastructure.

With $4.9 billion in cash and equivalents as of Dec. 31, ServiceNow has the flexibility to pursue such a deal, particularly as valuations that software vendors achieved in the past two years dip lower amid a broader market correction.

However, McDermott, who favored an acquisition-heavy strategy while in charge of German software giant SAP, previously ruled out anything beyond smaller so-called tuck-in deals, like its purchase of Lightstep in May for an undisclosed price. And his mindset hasn’t changed.

“We don’t need to acquire anyone’s technology or any other companies to fulfill our dreams,” McDermott said.

(Updates with annual forecast in the seventh paragraph.)