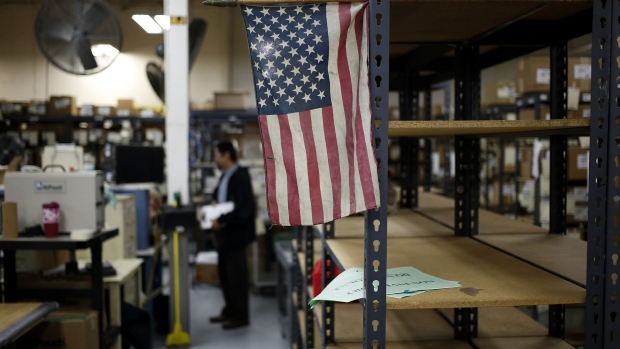 U.S. service providers expanded in April at the second-fastest pace in data back to 1997, cooling slightly from the prior month as business activity and order growth pulled back from record highs.

While trailing forecasts, the April figure indicates a resumption in the swift rebound for sectors hardest hit by the pandemic-driven downturn. With vaccinations rising and restrictions on capacity and travel easing, U.S. service providers are increasing headcount to meet burgeoning demand.

“The rate of expansion is still strong,” Anthony Nieves, chair of the ISM’s Services Business Survey Committee, said in a statement. “Respondents’ comments indicate that pent-up demand is continuing.

“Production-capacity constraints, material shortages, weather and challenges in logistics and human resources continue to affect deliveries, which has resulted in a reduction of inventories,” Nieves said.

ISM’s measure of services employment rose to 58.8, the highest since September 2018. The pickup reinforces expectations for another month of strong job growth when the government’s employment report is issued Friday. The median forecast in a Bloomberg survey of economists calls for an almost one million increase in April nonfarm payrolls.

While the ISM’s index of business activity among services fell after reaching a series high in March, some 46 per cent of respondents said it was higher. That matched the second-largest share on record.

Similarly, the new orders gauge slipped to 63.2 from a record but more purchasing managers reported a pickup from a month earlier. Some 45 per cent said orders strengthened, the second-biggest share in data back to 1997.

A gauge of prices paid by service providers climbed for a third straight month. At 76.8, it’s the highest level since July 2008. The consistent price gains may stoke further debate on the inflationary pressures building across the economy.

The report, which covers the industries that make up almost 90 per cent of the economy, follows data out earlier this week that showed supply chain challenges and materials shortages limited further momentum in the manufacturing sector.

A measure of inventory sentiment at service providers fell to a record low, indicating an increasing number of firms see their stockpiles as too low.

In addition, a measure of service industry inventories fell to a seven-month low, indicating firms are relying more on unsold goods to meet demand as backlogs build.

Unfilled orders at service providers are at their highest since August and supplier deliveries are lengthening, based on the ISM’s indexes.