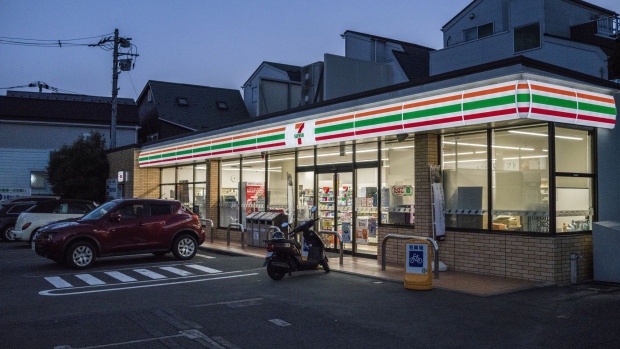 Vehicles and a motorbike are seen in front of a 7-Eleven convenience store, operated by Seven & i Holdings Co., in Tokyo, Japan, on Monday, June 17, 2019. The Japan Franchise Association will release sales figures on nationwide convenience stores on June 20. Photographer: James Whitlow Delano/Bloomberg , Bloomberg

(Bloomberg) -- Seven & i Holdings Co., the Japanese company that controls 7-Eleven, is in exclusive talks to acquire Marathon Petroleum Corp.’s Speedway gas stations for about $22 billion, according to people familiar with the matter.

The 7-Eleven owner is lining up financing for the potential transaction, which could be announced as soon as next week, said the people, who asked not to be identified as the deliberations are private. No final decision has been made and discussions could fall through, they said.

Representatives for Marathon Petroleum and Seven & i declined to comment. Shares of Seven & i erased gains in Tokyo and fell as much as 3.4% in their biggest drop since April 2019.

At about $22 billion, a potential deal for Speedway could be the largest overseas acquisition by a Japanese company since Takeda Pharmaceutical Co.’s $62 billion purchase last year of Shire Plc., according to data compiled by Bloomberg.

Marathon Petroleum, a refiner under pressure from activist investors to break up, is exploring a sale of Speedway after announcing plans last year to spin off the retailer, people familiar with the matter said in January. Speedway, with about 4,000 stores in the U.S., could be worth as much as $18 billion including debt as a standalone company, Marathon Petroleum previously said.

Speedway has also drawn interest from TDR Capital, which is interested in merging Speedway with one of its portfolio companies, U.K. gas-station operator EG Group, in a transaction that could be worth an estimated $26 billion in cash and stock, Bloomberg News reported last week.

Tokyo-based Seven & i, which traces its roots to a clothing store started in 1830, is Japan’s largest convenience store operator. It had more than 69,000 stores in 18 countries and regions at the end of 2018, according to its 2019 annual report.

(Updates to add Seven & i share price in third paragraph.)

To contact the reporters on this story: Scott Deveau in New York at sdeveau2@bloomberg.net;Kiel Porter in Chicago at kporter17@bloomberg.net;Manuel Baigorri in Hong Kong at mbaigorri@bloomberg.net

To contact the editors responsible for this story: Liana Baker at lbaker75@bloomberg.net, Fion Li, Michael Hytha