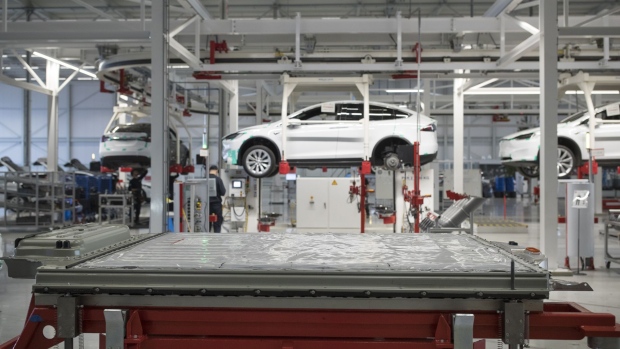 A battery pack sits on a trolley before a Model X at a factory in Tilburg, Netherlands. Photographer: Jasper Juinen/Bloomberg , Bloomberg

Tesla Inc. will provide a highly anticipated technology update on Tuesday when Elon Musk takes center stage at an event the chief executive officer has dropped hints about for months -- and which has helped propel the company’s sky-high valuation.

The “Battery Day” presentation, which follows the annual shareholders meeting, is expected to showcase innovations designed to keep the company’s lead in electric cars as rivals flood the market with new battery-powered vehicles over the next couple of years.

If history is any guide, Musk could talk about demand for Tesla’s vehicles at the shareholder meeting or give updates about new factories in Berlin and Austin, Texas. In an internal email to staff in Sunday, Musk indicated Tesla may be in line for a record quarter.

The first-ever Battery Day, where Tesla will stake out its technology road map, is of keen interest to investors. The tiniest improvement in batteries can have a huge impact, because they are an electric car’s most-expensive part.

A battery pack sits on a trolley before a Model X at a factory in Tilburg, Netherlands. Photographer: Jasper Juinen/Bloomberg

Will Musk and Chief Technology Officer Drew Baglino go super deep with a highly technical presentation on battery chemistry and improvements made since Tesla acquired Maxwell Technologies in 2019? Is Musk -- who just last year vowed that 2020 would be the year of the robotaxi -- going to promise flying cars? Or will he tout improved range for Tesla’s existing vehicles and pledge to add a more budget-friendly car to Tesla’s lineup?

“A lot of the stuff that Tesla has been working on is about making the battery manufacturing cheaper, not a new recipe for a battery or a completely new revolutionary structure,” said Sam Jaffe, managing director of Cairn ERA in Boulder, Colorado. “But when they institute all of these advances, they will be able to make a US$25,000 car.”

The shareholder meeting gets underway at 1:30 p.m. local time on Tuesday in Fremont, California, and Bloomberg will cover it as it unfolds in a live blog. Musk likes to keep his fans and rivals guessing, but here are seven educated guesses about what he may unveil.

About a decade ago, the U.S. Department of Energy set a target to bring the cost of battery packs down to US$100 per kilowatt-hour from an average of more than US$1,000. It predicted when this milestone is reached, electric cars will achieve cost parity with those powered by internal combustion engines, eliminating the EV premium for buyers. Tesla is likely to announce its battery costs have dropped to less than US$100 per kilowatt-hour, according to Venkat Viswanathan, a battery expert at Carnegie Mellon University. Tesla’s cost could fall further to US$80 per kilowatt-hour by 2025, said James Frith, head of energy storage at BloombergNEF.

One reason Tesla can make cheaper batteries is because it packs more energy in less material and volume. This matters because the size of a vehicle won’t change much, but the amount of energy stored in its batteries goes up -- allowing electric cars to go further on a single charge. The high-end Model S boasts a range of about 400 miles per charge, the longest of any car now on the market. Currently, the most advanced batteries found in a Tesla Model 3 have an energy density of about 250 watt-hours per kilogram, according to BloombergNEF’s Frith. By 2025, that could rise to as much as 400 watt-hours per kg, he said.

Batteries have three major components: two electrodes -- anode and cathode -- and an electrolyte that helps shuttle the charge between them. The materials used to make them determine how much energy batteries store and at what cost.

Tesla’s acquisiton of Maxwell Technologies gives it the ability to use dry-electrode technology, said Colin Rusch, a senior analyst at Oppenheimer. That can help lower the amount of energy needed for the manufacturing process. Even if Musk doesn’t mention Maxwell by name, there’s a good chance Tesla has adopted dry-electrode technology in some form.

‘Wet’ vs. Dry Electrodes: To ready the components of a battery, energy-storing chemicals are mixed in a solvent. That process helps the mixture to have a pancake-mixture type consistency, which can then be coated on aluminum or copper sheets. Once the coating is done, the sheets are passed through hot ovens to dry out the solvent before the electrodes can be packed into a battery. Dry-electrode technology does away with the use of solvents altogether by adding so-called binder chemicals, which when heated become sticky enough to hold the powdered mixture tightly onto the metal sheeting. The upshot is that dry-electrode technology can help lower the amount of energy needed for the manufacturing process and reduce the use of equipment and space on the factory floor -- all ways to shave costs.

In 2019, Tesla also acquired Hibar Systems Ltd., a Canadian equipment manufacturer. There’s a small chance Musk may announce that Tesla is making its own batteries, according to analyst Jeff Osborne of Cowen & Co., in addition to using batteries from Panasonic Corp., Contemporary Amperex Technology Ltd. and LG Chem Ltd. While getting into manufacturing is capital intensive and thus risky, it could pay dividends in the long term.

Tesla is on a mission to reduce the use of cobalt in its batteries, and Musk might have news to share about progress on that front. The reason: Cobalt is expensive, and most of it comes from mines in the Democratic Republic of Congo that are known to employ children and disregard environmental norms. Panasonic, which supplies NCA (nickel cobalt aluminum) cells to Tesla, has said it plans to commercialize a cobalt-free version in two to three years. Meanwhile, CATL provides Tesla with lower-cost lithium-ion-phosphate batteries that don’t contain any cobalt but are less energy-dense than NCA batteries. Musk has said Tesla also is looking for cheaper and greener supplies of nickel.

Musk has said in the past that Tesla “dopes” anodes that contain graphite with a little bit of silicon. This helps because silicon has a much higher affinity for lithium, so the more silicon there is in the anode, the higher the energy density of the battery. It’s possible Musk will announce Tesla has found a way to increase the amount of silicon loading in graphite anodes, Frith said, but the CEO probably won’t announce Tesla has all-silicon anodes, which are still a few years away from commercial use in EVs.

Tesla may follow CATL in announcing it now offers a million-mile battery, or one with as many as 20,000 charge-discharge cycles. Currently Tesla has a 150,000-mile or 8-year warranty, whichever comes first. A million-mile battery probably won’t extend the warranty seven-fold, because other components of the car probably will wear out sooner. But it could allow Tesla to make fleet vehicles, such as the long-promised autonomous taxis, that rack up mileage much more quickly than privately owned cars. Cowen’s Osborne also said this could allow Tesla cars to connect with the electric grid and provide services to utilities, such as absorbing excess renewable energy or reducing demands on transmission infrastructure.

Tesla’s most longstanding partner on batteries has been Osaka-based Panasonic. The two companies jointly operate the massive battery plant outside of Reno, Nevada: Panasonic makes the cells, and Tesla strings thousands of cells into the massive battery packs for each car. But Musk has never been keen about depending on one supplier, and Tesla does have smaller-scale agreements with CATL in China’s Fujian province and LG Chem in Seoul. As Tesla builds additional plants in Berlin and Austin, Texas, who will supply the batteries for them? Tesla also sells stationary batteries, which it calls the Megapack, to utility companies that need battery storage for the electric grid.

Will one supplier emerge as dominant for Tesla’s auto business, while another focuses on the utility market?

“We expect an update on its relationships with cell partners like Panasonic and CATL,” said Rusch of Oppenheimer. “Given the scale of the opportunity in both vehicle and stationary power, we expect TSLA to continue working closely with a few battery suppliers to scale production with key steps remaining in TSLA facilities.”