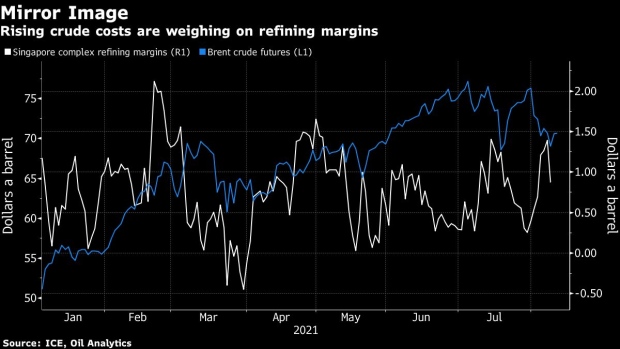 (Bloomberg) -- Several Asian refiners asked for less oil from Saudi Arabia for next month as steps to rein in the delta virus variant weighed on demand.

At least four customers --- three in Northeast Asia and one in Southeast Asia -- requested smaller volumes than their contracted supplies for September, according to officials at the refineries. Saudi Aramco notified them this week that it will give them the amounts they asked for, they said. The Saudi state-owned oil company declined to comment on the matter.

Authorities across Asia are extending or imposing fresh restrictions on mobility to rein in the fast-spreading delta strain. China, the world’s biggest crude importer, is following an aggressive containment strategy despite having one of the world’s highest vaccination rates. China Petroleum & Chemical Corp., the country’s biggest refiner, will cut run rates at some plants by 5% to 10% this month from July, according to commodities researcher ICIS-China.

Asian processors are also struggling with rising crude costs at a time when complex refining margins remain well below their five-year average. Aramco has raised the prices of its Arab Light and Arab Medium crudes to the highest since February 2020, creating an opening for more competitively priced grades from the U.S. and Russia. Brent’s premium over the Dubai benchmark is near the lowest since mid-June, making Atlantic Basin barrels more attractive.

It’s likely the weaker demand environment in Asia will also be reflected in the physical market. Spot cargoes of Middle Eastern and Russian grades will start trading later this week after all the official selling prices are released.