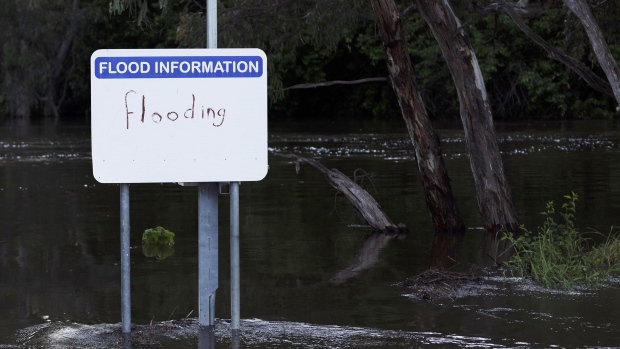 FORBES, AUSTRALIA - NOVEMBER 17: Flood waters are seen over the banks of the Lachlan River on November 17, 2021 in Forbes, Australia. Evacuation orders have been issued for residents in Forbes in Central West New South Wales as floodwaters inundate the region following heavy rains across the state. Residents in low-lying areas of Forbes are being told to leave their homes as the Bureau of Meteorology warns flood levels will peak on Wednesday. (Photo by Brook Mitchell/Getty Images) , Photographer: Brook Mitchell/Getty Images AsiaPac

(Bloomberg) -- Severe flooding episodes across vast swathes of eastern Australia this week show no signs of relenting as costs to farmers continue to mount, with another bout of heavy rain on course to hit the already sodden growing regions over this weekend.

Grain farmers are bracing for a further deterioration in weather conditions after Australia experienced its wettest November on record in 122 years, resulting in reports of widespread quality downgrades for crops. The rains have also bogged down machinery just as growers head into what should be peak harvest season across many areas in Queensland and New South Wales.

While the full extent of the damage is still unknown as many growers are unable to access flooded paddocks to tally up the costs, the figure could top A$1 billion ($707 million), according to the NSW Department of Primary Industries. Much of that would be put down to lost crop potential, even though Australia is still on track to produce a record wheat harvest this season.

The downpours and quality downgrades are deepening concerns about dwindling global supplies of bread-making wheat after severe drought slashed production in Canada and parts of the U.S. earlier this year.

After the Bureau of Meteorology officially declared a La Nina event last week -- a weather phenomenon that brings greater rainfall and increased probability of cyclones and floods -- there’s unlikely to be any drastic improvement in the rain outlook over the coming months. Total falls during the December to February period are expected to be above the median for NSW, the eastern two-thirds of Queensland and Victoria state.