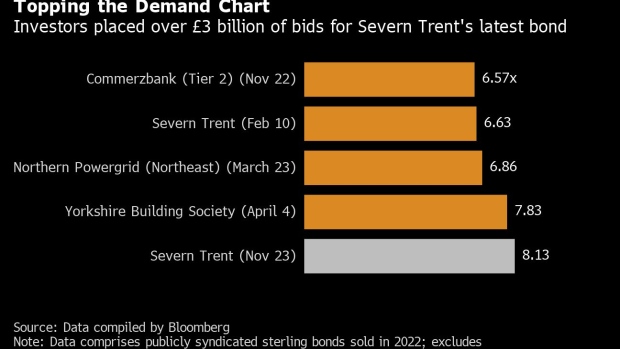 (Bloomberg) -- One of Britain’s largest water companies sold the year’s most successful sterling company bond, even as the industry faces public anger over leaks in the system and cases of sewage spilling into rivers.

A £400 million ($478 million) 12-year sustainability bond for Severn Trent Plc on Wednesday drummed up more than £3 billion of investor bids, according to a person familiar with the matter, who asked not to be identified because they’re not authorized to speak about it. The ratio of orders to deal size is the highest of any corporate note in the currency issued this year, according to data compiled by Bloomberg.

The hefty demand is a reflection of the economic climate as investors look toward safe assets, yet have more confidence in the pound following Chancellor of the Exchequer Jeremy Hunt’s autumn statement. Water companies are attractive because they benefit from population growth and are considered critical infrastructure.

“It is a strong domestic utility name, offering sustainable-format debt in an undersupplied sterling market -- the perfect combination,” said Marco Baldini, global co-head of investment grade syndicate at Barclays Plc, who worked on the deal. “The market has settled down post-budget and investors just want to be able to invest in strong deals again.”

Issuance of sterling bonds has rebounded in November as the UK currency, gilt and stock markets pared sharp losses and investors regained confidence in the UK. Companies and public sector entities have sold about £18.55 billion of sterling bonds this month, the most since January, which is one of the busiest months for bond sales.

“It is a strong water name,” said Jamie Irvine, a London-based investment manager at abrdn plc. “The demand at those levels isn’t surprising as it’s the first non-financial deal to come to the market in about month, from a decent water utility,” he said.

Utilities in England sparked criticism this summer over billions of liters of water leaking from pipes at a time when restrictions were imposed on households. Some people are still affected by hosepipe bans.

Water companies have also faced intense criticism for the amount of sewage leaking into rivers and on to beaches. The Liberal Democrats, an opposition party, has called for regulator Ofwat to be scrapped and replaced, and for water bosses to be banned from taking bonuses. Severn Trent Chief Executive Officer Liv Garfield was paid £3.9 million last year.

Garfield said Tuesday that her company is ramping up help for struggling customers as the cost-of-living crisis bites. She told the BBC’s Today program that the move is costing it about an extra £30 million.