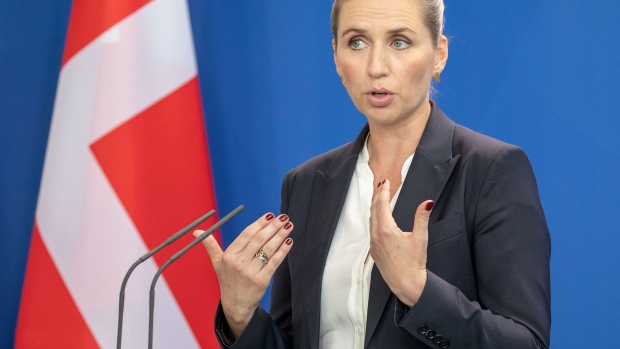 Pedestrians walk a street bordering the Navigli canal system in Milan, Italy, on Wednesday, April 8, 2020. Italy is beginning to look at easing its lockdown after Denmark and Austria became the first two European countries to loosen restrictions as governments seek to gradually revive economies crippled by the containment measures without risking a second wave of infection. Photographer: Francesca Volpi/Bloomberg , Bloomberg

(Bloomberg) -- A country generally admired for its high standards of gender equality is now dealing with allegations of systematic sexual harassment at the top of the political establishment.

Denmark’s parliament has for years allegedly served as a backdrop for misogynistic conduct including everything from rape to sexual intimidation of female interns by male lawmakers. That’s according to a list of accusations signed by 322 current and former female politicians and parliament employees.

Prime Minister Mette Frederiksen says it’s now “impossible to contest” that there’s a problem, and has hired external lawyers to look into the allegations. That’s as she herself faces criticism for appointing a foreign minister who admitted to having had sex with a 15-year-old when he was 34.

The discussion has forced a national debate around abuse in a country that sees itself as a bastion of equality and openness. Part of the issue is complacency, according to Helle Thorning-Schmidt, a former prime minister and the first woman ever to lead Denmark’s government.

“We’ve long assumed that we’d achieved gender equality,” Thorning-Schmidt said in a phone interview. “And because of that, we assumed that there’s probably no sexual harassment.”

But the revelations in recent weeks are a “wake-up call,” she said.

Denmark’s MeToo moment started in August, roughly three years after the movement gripped most of the rest of the world. And the medium through which it arrived was television.

Sofie Linde, a popular TV host, stunned her audience at an awards show when she went off-script and spoke of an encounter that took place when she was 18. She said a senior staff member ordered her to perform oral sex, or risk having her career derailed.

Linde, who says she refused, triggered a flood of reactions. In the weeks that followed, hundreds of testimonials were published in newspapers and on social media, revealing similar experiences in which young women across many professions spoke of being the victims of sexual harassment.

Newspaper opinion columns were filled with commentaries on the outpouring. Some were dismissive, some mocking, but many suggested that Denmark was facing a moment of reckoning.

Thorning-Schmidt became prime minister in 2011, 96 years after Danish women got the vote. She says Danish self-perception has made it hard for the nation to believe it’s prone to the same forms of sexual abuse that the U.S. has seen. The former premier also points to a widespread suspicion of political correctness in Denmark.

Against that backdrop, Denmark’s parliament became an environment in which those in power were often deaf to complaints by women, according to allegations by its female staff.

Kira Marie Peter-Hansen, a 22-year-old Danish member of the European parliament and one of the 322 signatories of the letter, says there’s been a tendency to accept sexual harassment in Denmark.

“But my generation has a clearer sense of where the boundaries need to be,” she said by phone.

Frederiksen, who leads the same Social Democrat party that Thorning-Schmidt once ran, now needs to respond to allegations that she tried to talk down concerns over her foreign minister, Jeppe Kofod. In 2008, Kofod was a high-ranking Social Democrat who was the party’s representative on a number of parliamentary committees. The 15-year-old he slept with was member of the junior wing of the Social Democrats. She was just within the legal age of consent that prevented the act being a crime.

Kofod apologized publicly at the time and Thorning-Schmidt, who was party chair in 2008, stripped him of his duties. Back then, she was criticized for being overly harsh by, among others, Frederiksen.

Frederiksen defends her decision to support Kofod by referring to his public apology. “I think it’s important that if one makes a serious mistake, which is what this is, that one apologizes and distances oneself from it. And there’s nothing more to say,” she told broadcaster TV2.

But Denmark’s new-found awareness around the issue of sexual victimization has cast the incident in a new light.

“Those in leadership roles who helped cover up such cases need to ask themselves whether they are a part of the solution, or part of the problem,” Thorning-Schmidt said.