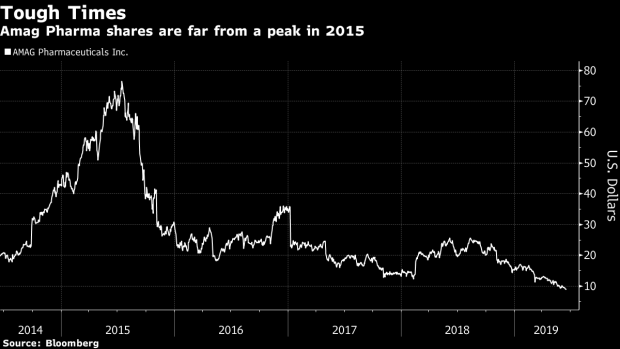 (Bloomberg) -- An approval by U.S. regulators for Amag Pharmaceuticals Inc.’s drug to increase women’s sex drive, something like a female Viagra, could provide relief for shares that are trading near the lowest level since 2005.

The Food and Drug Administration’s decision on the self-injected medicine, Vyleesi, may help ignite shares that have fallen 60% in the past year, Barclays analyst Balaji Prasad wrote earlier this week. The agency is expected to rule by Friday after regulators pushed back a decision date from March.

Barclays estimates the drug could bring in annual revenue of roughly $150 million by 2030. The initial launch should be slow with about $40 million in sales in 2022 given the need for campaigns to increase awareness and education about hypoactive sexual desire disorder, Needham analyst Serge Belanger wrote last month.

SVB Leerink’s Ami Fadia cautioned that even if approved, the new medicine would not be enough to offset erosion of the company’s more important drugs.

Shares of small-cap drugmaker Palatin Technologies Inc. will react to the FDA’s decision as it is set to receive a $60 million payment upon approval with further milestones and royalties dependent on the drug’s commercial success. The Cranbury, New Jersey-based company has more than doubled so far this year as its pipeline advances.

To contact the reporter on this story: Bailey Lipschultz in New York at blipschultz@bloomberg.net

To contact the editors responsible for this story: Catherine Larkin at clarkin4@bloomberg.net, Jennifer Bissell-Linsk