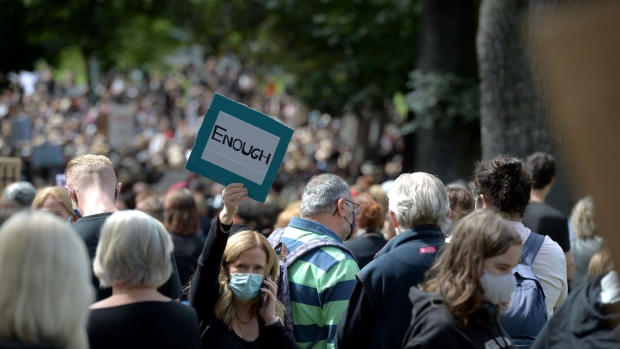 (Bloomberg) -- A landmark report aimed at cleaning up a toxic workplace culture in Australia’s parliament and other government offices found that one in three employees had suffered sexual harassment.

Just over a quarter of those that experienced sexual harassment said a member of parliament was responsible, in the survey of more than 1,700 individuals. Some 37% of staff said they had suffered bullying.

Prime Minister Scott Morrison indicated that his government will likely support the report’s 28 recommendations, which include setting targets for gender balance and diversity across all parliamentary roles.

The report addresses “the power imbalance, the gender imbalance, the lack of accountability for behavior, as well as understanding the challenging and demanding work environment” in parliament, Morrison told reporters in Canberra Tuesday.

Morrison ordered the independent inquiry to be conducted by Sex Discrimination Commissioner Kate Jenkins after thousands of women rallied across Australia to protest against sexual violence.

“While we heard of positive experiences of work within the Parliament, there were others who shared experiences of bullying, sexual harassment and sexual assault,” Jenkins said in the report. “Too often, we heard that these workplaces are not safe environments for many people within them.”

Morrison’s government has been criticized for refusing to hold an inquiry into claims that former Attorney-General Christian Porter raped a fellow member of a school debating team in 1988 -- allegations he denies. Porter has since resigned from the ministry.

There was also criticism of Morrison’s handling of allegations that former government media adviser Brittany Higgins was raped by a fellow staffer in a minister’s office in 2019.

One of the individuals interviewed for the report said: “It is a man’s world and you are reminded of it every day thanks to the looks up and down you get, to the representation in the parliamentary chambers, to the preferential treatment politicians give senior male journalists.”

Multiple participants complained about the lack of women in senior roles, saying the workplace possessed a “male-dominated and testosterone-fueled culture.” Rather than being held accountable, people who engaged in misconduct were often rewarded for, or in spite of, their behaviour, workers said.

Among the recommendations in the report are --