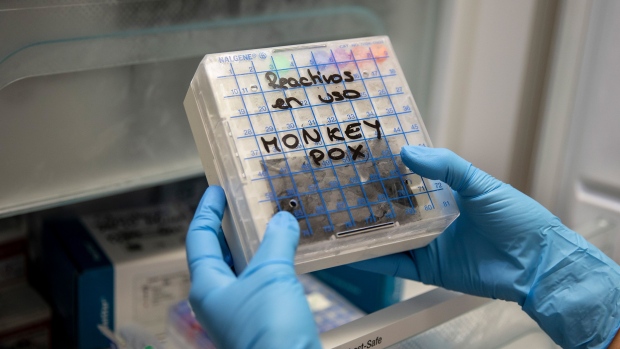 MADRID, SPAIN - JUNE 06: A medical laboratory technician picks up from a fridge a reactive to test suspected monkeypox samples at the microbiology laboratory of La Paz Hospital on June 06, 2022 in Madrid, Spain. Europe is at the centre of the monkeypox virus outbreak, the World Health Organisation reported 780 confirmed cases with Britain, Spain and Portugal reporting the largest numbers of patients. (Photo by Pablo Blazquez Dominguez/Getty Images) , Photographer: Pablo Blazquez Dominguez/Getty Images Europe

The first study of 54 monkeypox patients in the UK found that their symptoms differed from those seen in previous outbreaks and can potentially be mistaken for other infections, such as herpes and syphilis, increasing the risk of misdiagnosis.

“Misdiagnosis of the infection may prevent the opportunity for appropriate intervention and prevention of onward transmission,” said Ruth Byrne of the Chelsea and Westminster Hospital NHS Foundation Trust and one of the authors of the study published in The Lancet Infectious Diseases journal. “Additional resources are urgently required to support services in managing this condition.”

Britain and other countries are seeing a rapid rise in monkeypox cases among individuals at sexual health clinics, with no apparent links to countries where the disease is endemic, the authors said.

In the past two weeks, cases have tripled in the European region, the World Health Organization reported Friday. The agency said most infections are in men who have sex with other men, but small numbers are now being reported among household members, heterosexual contacts and non-sexual contacts, as well as children.

More than nine out of 10 patients in the UK study had monkeypox lesions in the genital region -- a distinct feature of the current outbreak and a driver of the virus’s explosive spread through sexual networks. The research also found a lower prevalence of tiredness and fever than in cases from prior outbreaks.

The patients represent 60% of the cases reported in the UK during a period in May, and all identified as men who have sex with men. At least one in six of the patients in the study wouldn’t have met the current definition of a probable monkeypox case, according to Nicolo Girometti, who is also with the Chelsea and Westminster hospital.

“We suggest that case definitions currently detailing symptoms such as acute illness with fever should be reviewed to best adapt to the current findings,” he said.

The authors acknowledged some limitations with their study, primarily that it was observational and retrospective and may not be representative of the overall outbreak.

The findings corroborate smaller studies from other countries that the initial presentation of monkeypox can be “subtle and mimic many sexually transmitted infections,” said Hugh Adler from the Liverpool School of Tropical Medicine, who was not involved in the study. He added that current UK case definitions are broader now than when the data was collected for this paper.