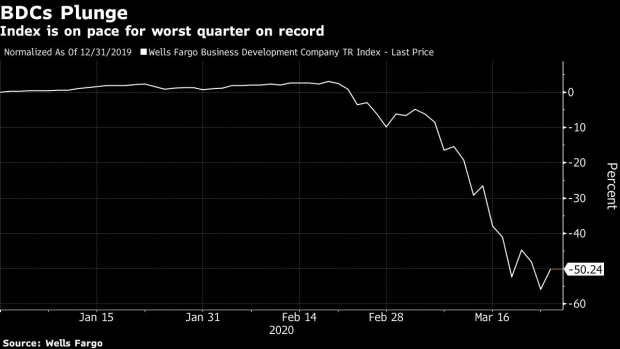 (Bloomberg) -- Business development companies, publicly-traded lenders to mid-size firms, are getting hammered as panicked investors dump shares amid uncertainty about the impact of the coronavirus on small businesses.

The Wells Fargo Business Development Company Total Return Index has plummeted 50% this year, with most of the losses occurring in March. It’s on track to be the worst quarter since the index was established in late 2004, according to data compiled by Bloomberg. Shares for such vehicles including Apollo Investment Corp., Prospect Capital Corp. and Golub Capital BDC Inc. have sunk to their lowest prices ever this month.

Nervy retail investors have unloaded shares amid a broad-based sell-off in equity and credit markets. Vehicles investing in BDCs have also been forced to liquidate. Analysts argue that the lenders, a corner of the $812 billion private-credit market, are facing their first true test with credit losses likely to mount as companies grappling with the fallout from Covid-19 are forced to shut down to limit contagion.

“What the market’s struggling with right now is what kind of recession is this going to be?” said Mitchel Penn, an analyst at Janney Montgomery Scott.

Mom and pop investors, which make up a large swath of the market’s base, have sold shares at a rapid clip with few buyers emerging. Long-only mutual funds are generally prevented from buying shares in BDCs due to regulatory constraints, and at least three BDC-focused exchange-traded notes were “mandatorily redeemed” on March 17 after prices fell below a level that triggered the action, according to a note from JMP Securities.

The relative small market capitalization of BDCs -- which average $518 million in the Wells Fargo & Co. Index -- can also exaggerate moves during times of stress.

“The prices of BDCs are implying some severity of credit losses that we’ve never seen before,” Penn said.

Representatives for Apollo and Golub declined to comment. A request for comment from Prospect Capital wasn’t immediately returned.

Still, some of the companies that BDCs lend to could weather a downturn lasting as long as a year by cutting costs, getting infusions of capital from private equity sponsors and switching to payment-in-kind interest rather than paying interest in cash, Penn said. And a slew of BDC executives have been snapping up beaten-up stock, with some saying dislocations are creating buying opportunities.

“It this goes on longer than a year, that’s when it gets more complicated and we just don’t know the impact,” he said. “In this recession, you could have good companies that go out of business just because they’re in sectors that are impacted by the virus. There might be good, sound companies that just need waivers.”