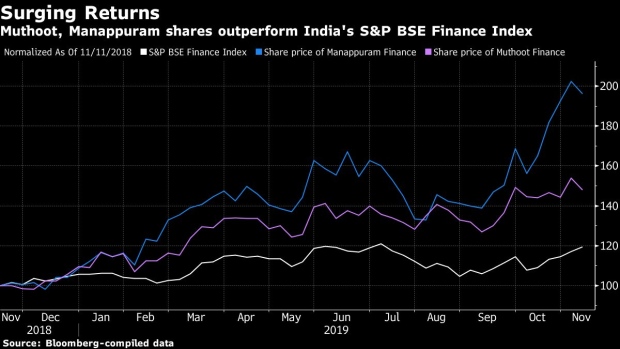 An employee holds Indian rupee banknotes inside the Zaveri Kapoorchand Lalchand jewelry store during the festival of Dhanteras in the Zaveri Bazaar in Mumbai, India, on Friday, Oct. 25, 2019. Gold sales on the most auspicious day in India to buy the metal tumbled this year as high prices and concerns about an economic slowdown saw customers limit purchases. Photographer: Dhiraj Singh/Bloomberg , Bloomberg

(Bloomberg) -- As the shakeout in India’s credit market shows few signs of abating, one group of financiers is benefiting from the turmoil: shadow banks that provide loans in exchange for gold.

In a country deeply attached to the precious metal, whose people stockpile more gold than citizens of any other country, borrowers are increasingly pawning their family jewelry to get cash amid a fundraising crunch.

That’s helped double the share price in the past year of Manappuram Finance Ltd., one such firm, while the stock of Muthoot Finance Ltd., the country’s largest cash-for-gold lender, has jumped 47%. Those financiers’ bonds are also in demand at a time when investors are shunning debt from other shadow banks, which are struggling from lack of funds and credit downgrades.

More than half of the loans from these lenders get repaid in less than six months, providing firms with a steady stream of cash to pay off their own debt and thus avoiding a so-called asset-liability mismatch. The recent rise in gold prices is also a boon. Indian households have almost $1 trillion worth of gold, and the nation is the biggest buyer of the metal after China.

“Shorter tenure of our loans helps to keep a check on asset-liability mismatches while a rise in the gold prices will help in keeping a check on asset quality too,” said V P Nandakumar, the chief executive officer of Manappuram Finance, in an interview. “Both equity and credit markets are looking favorably at non-bank lenders with robust business models who have got both these pieces right.”

Many shadow lenders have been effectively shut out of the nation’s credit market as the more than 15-month-old banking crisis raises investor wariness about the financiers’ ability to refinance debt. Lenders including Dewan Housing Finance Corp. and Altico Capital India Ltd., which have been using short-term debt to fund long-term loans they extended, have defaulted in 2019, adding to the risk-off sentiment in local markets.

Cash-for-gold lenders face risks of their own. A major one is the price of the metal. While gold has gained this year, if it reverses course and falls steeply that could hurt the companies’ asset quality and business, according to rating firm ICRA.

For now, though, debt investors appear enthusiastic about the sector.

Manappuram raised 13.8 billion rupees ($194 million) via local currency bonds in the 12 months to the end of October, five times higher than issuance a year earlier. Muthoot Finance’s $450 million debut dollar bond in October met with strong investor demand, allowing the company to lower its coupon by 25 basis points compared with the initial guidance.

To contact the editors responsible for this story: Andrew Monahan at amonahan@bloomberg.net, Ken McCallum