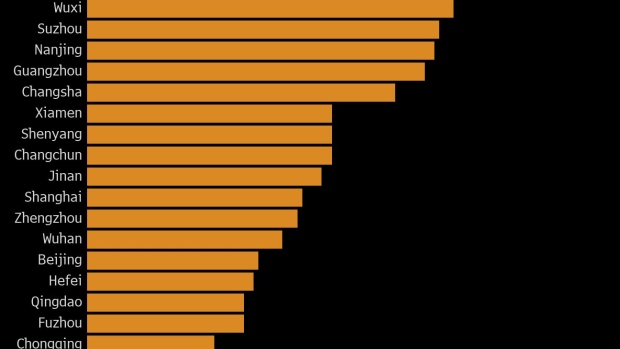 (Bloomberg) -- Finance firms owned by China’s local governments have become massive buyers of land for real estate development, filling a void left by developers and exacerbating risks for the $8.4 trillion sector. The International Monetary Fund warned that a protracted housing downturn in China is a key risk to the global economy, along with Federal Reserve tightening.

In nine of 21 large Chinese cities that packed in land sales over the last two months of 2021, at least half of the plots were bought by these local government financing vehicles, or LGFVs, according to consulting firm China Index Holdings. Some of these purchases were worth billions of dollars.

A gauge of Chinese property stocks dropped for the first time in six sessions Tuesday, led by China Evergrande Group and Sino-Ocean Group Holding Ltd. Shimao Group Holdings Ltd.’s dollar bonds rallied and its shares surged on a report that the developer put 34 projects up for sale as it seeks to raise billions of dollars for debt repayment.

Across China, local government financing vehicles have replaced cash-strapped property developers as the biggest buyers of land for real estate development, stoking fresh concerns over the ability of these off-balance sheet borrowers to repay a debt pile that tops $8.4 trillion by some estimates.

While the moves may help arrest a land sale slump and provide much-needed revenue for local governments, the purchases threaten to exacerbate risks for LGFVs -- the second-biggest non-financial borrowers in the offshore market and the biggest onshore.

The two most-important variables for global macro investing are perhaps Federal Reserve policy and China’s housing, which contributes the lion’s share to the world’s second-largest economy. Indeed, the International Monetary Fund’s latest outlook warned that a protracted housing downturn in China is one key risk to the global economy, along with Fed tightening.

On Tuesday, the IMF cut its global growth forecast for this year, citing weaker prospects for the U.S. and China. It reduced China’s forecast to 4.8%, from 5.6% in October, because of lower investment in real estate and tepid consumption as a result of Beijing’s zero-Covid strategy. The IMF estimate is on the lower end of the spectrum of private-sector economists’ forecasts. Several provinces have set their GDP target this year to at least 5%, fueling speculation that Beijing sees that number as the floor for growth.

The bond jumped to 65.5 cents on the dollar Tuesday before finishing little changed at 54.4 cents, according to data compiled by Bloomberg.

The world’s most expensive office market has more empty floor space than ever.

China will continue to strengthen financial oversight to “firmly forestall” systemic risks, according to a statement on the website of the banking and insurance regulator.