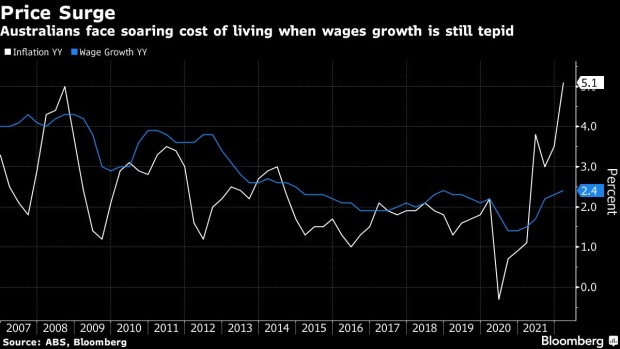 (Bloomberg) -- Economists agree Australia’s housing prices are about to sink. What they’re not so aligned on is just how much a slide in the country’s A$10 trillion ($6.9 trillion) property market will drag the economy down with it.

With interest rates rising and inflation yet to peak, few expect an economy that’s 60% fueled by consumption to escape unscathed from a housing correction. While some economists are talking of recession, others expect Australia’s consumers to withstand the reversal of a wealth effect that accelerated during the pandemic.

The disparity in views underscores the delicate balancing act that Reserve Bank Governor Philip Lowe must perform as the central bank seeks to quickly tame inflation that’s plaguing economies worldwide. Housing slowdowns driven by tightening cycles can have an outsized impact on broader economic growth as households cut spending to repay their mortgages, and Australia’s central bank is forecast to hike rates at the fastest pace on record.

Here’s a look at the optimistic and pessimistic scenarios for Australia’s economy as its housing market cools.

Optimistic analysts cite solid underlying economic momentum with unemployment at a near 50-year low of 3.9%, high job vacancies and still resilient consumer spending as reasons the economy will withstand a slide in home prices.

By comparison, during the previous property downturn in 2017-2019, unemployment hovered at 5-5.5% while household savings were less than half of what they are today.

Since January, home prices in the bellwether Sydney market have declined 0.9%, while the nationwide value saw its first decline in June since 2020. Australia & New Zealand Banking Group Ltd. economists predict Sydney prices will drop one-fifth by the end of next year.

Bloomberg Intelligence sees prices in the nation’s largest city falling 12-15% in 2022, based on the cash rate climbing to 1.75% by December.

Leading the cautious optimists is Governor Lowe, who has raised interest rates twice since May to 0.85% and is widely expected to move again in July. While he acknowledges that rapid hikes will trim the financial buffers amassed by the country’s indebted households over the past couple of years, he sees reasons to be positive.

“We’ve got more financial assets as well as A$200 billion of extra savings, that’s a lot of money,” Lowe said in Sydney last week. “There are a lot of kind of moving pieces here, but where we stand today, household spending has been pretty resilient.”

Among other reasons why most economists aren’t panicking are recent data showing that Australian businesses’ investment plans are the strongest in more than a decade, firms are still hiring hard and household savings are above 11% of income.

Andrew Boak, chief economist at Goldman Sachs Group Inc., has one of the most aggressive forecasts for the RBA’s rate path. While that drove him to also downgrade his economic growth estimates, he reckons the risks to the household sector from rising rates are manageable. Goldman predicts 50-basis-point rate hikes in July, August and September, and sees the RBA’s terminal rate at 3.1%, almost in-line with money market bets of 3.2%.

Boak points to a drop in net housing debt as a share of income from its 2008/09 peak, along with RBA data showing the average mortgage holder in Australia is 21 months ahead of repayments.

In addition, “seven years of macro prudential policy has substantially reduced risky lending,” Boak said in a report earlier this month, “and our analysis on the composition of household debt and the implied rise in the debt-servicing burden looks manageable.”

Economists surveyed by Bloomberg are predicting a mild economic slowdown in 2023 to quarterly growth rates of around 0.5% from a brisk pace of above 1% over the past year, as tighter monetary policy pushes unemployment higher and consumption lower.

While consumer spending has remained solid to date as the wealth effect reverses and loan repayments increase further -- especially after this month’s surprise 50-basis point hike -- a crunch may still be on the cards for Australian households, whose record high debt level of 187% of income is among the world’s worst.

In the pessimists’ corner, Deutsche Bank AG sees a heightened risk of a recession Down Under with Nomura Holdings Inc. an outlier in actually calling one for 2023.

Nomura’s Andrew Ticehurst, who sees the cash rate peaking at 3.1%, expects a slowing housing sector together with a “deleveraging” consumer as key drivers of a likely recession. He sees the average home loan rate rising by 140 basis points, in addition to an estimated 170-basis-point increase so far this year from lows of around 3%.

“We are particularly mindful of potential downside and non-linear amplifier effects, given that Australian consumers are carrying very high debt levels by global standards,” Ticehurst said, adding that an inflated balance sheet could deepen the economic downturn.