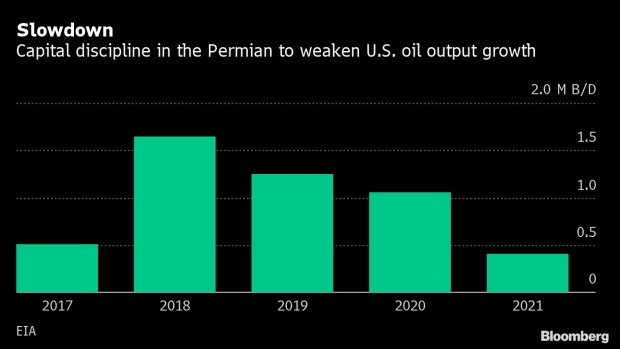 Production is set to expand by 400,000 barrels a day, the weakest growth since at least 2017, according to the U.S. Energy Information Administration. Output is seen increasing by a little over 1 million barrels a day this year.

The slowdown will be driven by austerity in the Permian Basin, America’s shale-oil engine. That’s after shares of producers were hammered for unbridled output coming at the expense of investor returns. The heads of companies including Pioneer Natural Resources Co. and Centennial Resource Development Inc. have warned of a downturn.

The EIA isn’t alone is expecting a slowdown in growth. The Paris-based International Energy Agency has issued similar forecasts.

Slower production growth could undermine America’s recent transition to being a net energy exporter. In October, the nation sent more crude and refined products abroad than it imported, marking the second consecutive month it was a net petroleum exporter.

To contact the editors responsible for this story: David Marino at dmarino4@bloomberg.net, Pratish Narayanan, Christine Buurma