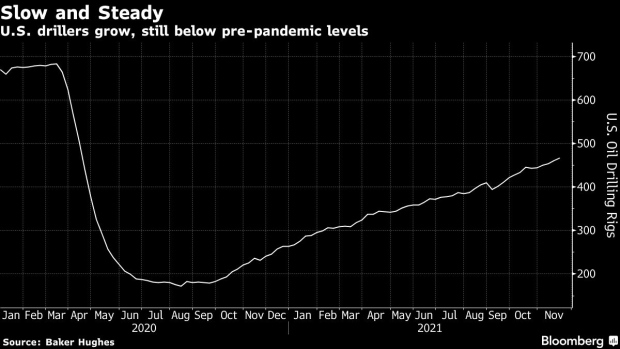 (Bloomberg) -- Shale explorers in the U.S. are showing no sign of accelerating the pace of deployment for drilling rigs, despite criticism from the Biden administration that they’re holding back on production to the detriment of consumers.

The number of rigs drilling for crude in U.S. fields rose by 6 to 467 this week, according to Baker Hughes Co. data released Wednesday ahead of the Thanksgiving Day holiday. It’s the second consecutive month that operators added 23 drilling rigs, suggesting that explorers are more interested in growing production slowly and steadily than in heeding the administration’s call for more supply. The total number of rigs remains far short of its pre-pandemic levels.

The White House announced on Tuesday a release of 50 million barrels from its reserves in coordination with China, Japan, India, the U.K., and South Korea, in a bid to increase supply and lower gasoline prices. The move comes after the White House unsuccessfully pushed OPEC+ to increase production to temper prices. Energy Secretary Jennifer Granholm said Tuesday the industry was making enormous profits while holding back drilling on public lands leased by the oil companies.