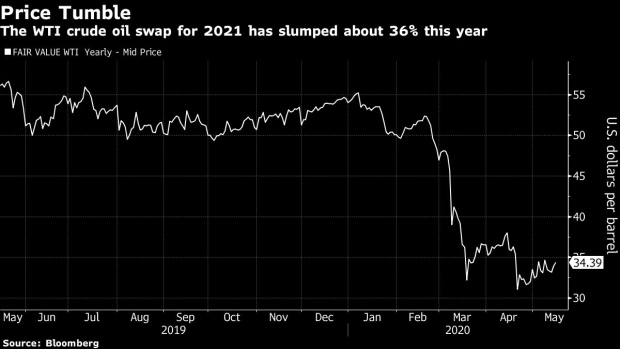 (Bloomberg) -- U.S. shale drillers spooked by the epic meltdown in oil markets are trying to figure out how to protect themselves in the future. It won’t come easy, or cheap.

After oil’s crash below zero, explorers face hefty premiums for the financial instruments they rely upon to insure against price swings. Meanwhile, they’re also unwilling to lock in future supply with forward prices for crude remaining lackluster.

“Producers are stuck between a rock and a hard place right now,” said Michael Tran, managing director of global energy strategy at RBC Capital Markets. “There has been a dearth of opportunities to hedge for 2021, and this is traditionally the time period when you lean into next year’s hedging at more robust levels.”

This year about half of U.S. producers tracked by BloombergNEF have their production hedged for 2021, according to first quarter company filings. In the first quarter of 2019, about 60% of producers hedged their output for the year ahead.

Even though U.S. oil prices for June have rallied some 75% this month, the West Texas Intermediate swap for 2021 has only edged 10% higher. That means the recent rally has been concentrated in the most active part of the oil curve.

The muted activity is likely a sign that producers are unsure what to do given that prices have rallied since turning negative but not enough to keep pumping barrels profitable. Producers outside of North America are also running into the same problems, and have barely been active since oil’s rout, traders said.

While producer hedging can be systematic in order to satisfy requirements from banks, a lot is also based on current price levels for different contracts. West Texas Intermediate for 2021 was selling for about $36 a barrel on Monday versus $54 at the start of the year.

There are growing reasons for producers to be optimistic too. Inventory levels are starting to draw, economies are restarting and producers have cut capital spending plans and production. Despite this, a smattering of producers -- particularly in the Permian Basin -- are hedging into 2021, even with signs of higher prices and a stronger market

“Clearly some companies are still willing to hedge in the $30-range, meaning they think there is a chance it could fall under that,” said Daniel Adkins, an analyst at BNEF.

That might also include companies tight on cash flow or with heavy debt on the books. Case in point: Diamondback Energy Inc has $400 million worth of debt maturing next September. The company intends to use hedge protection as one way to maximize liquidity, retain cash and pay down debt, executives said during an earnings call.

There are other aspects to lower hedging levels as well.

Explorers have been slashing spending and lowering their production outlooks in the wake of the coronavirus pandemic. In some cases, they might decide to limit how fast they resume production and drilling if crude prices end up exceeding the rate they hedged at.

Executives at Parsley Energy Inc, one of the more protected producers for 2021, told analysts on a May 5 conference call that there could possibly be a future cap on activity.

“These aren’t the levels where firms want to hedge right now because they can’t generate the kind of margin people need,” said John Saucer, vice president of research and analysis at Mobius Risk Group. “You need to see materially higher prices to turn the tide on this slashing of capital expenditures.”