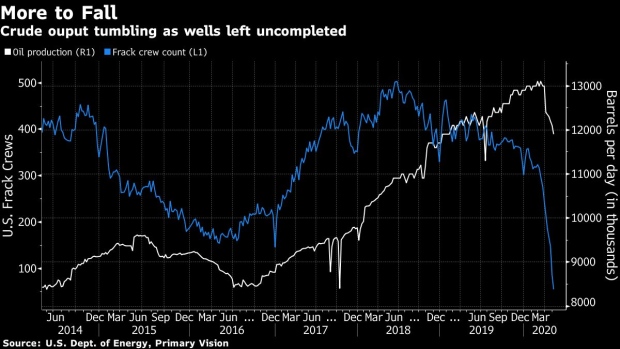 (Bloomberg) -- Shale drillers are signaling they’ll throw off restraints on oil production if crude reaches $30 a barrel, an ominous portent for a global industry still drowning in a supply glut.

The about-face is stunning for a sector scorched by the once-unthinkable twin disasters of a worldwide pandemic that slashed demand and negative crude prices. The historic market collapse prompted production shut-ins globally, but the retrenchment has been particularly acute in the U.S. as storage tanks approach full capacity and refiners scale back oil processing.

For OPEC, Russia and other international producers, the implications are dire. It took years of painful output caps to tame a pernicious oversupply that gutted crude prices, starving national budgets of sorely needed cash all the while. Just as the uptrend gained momentum, Covid-19 strangled the world’s biggest economies, paralyzing energy demand and erasing all price gains.

“Shale producers are nimble -- they can add rigs quickly and bring a well online in three months or less when the time is right,” said Bernadette Johnson, vice president of strategic analytics at Enverus, a data and research firm. “There will still be more painful announcements, but we are seeing the bottom.”

Diamondback Energy Inc., one of the most prominent shale specialists in the Permian Basin, sees a crude price in the high $20s-a-barrel or low $30s as a trigger to revive curtailed output and consider reactivating idled frackers. Right now, the explorer is in the process of halting as much as 15% of supplies and sending home almost all its fracking crews.

Parsley Energy Inc., which has idled one-fourth of its production and suspended all drilling and fracking, cited $30 as the critical price point. Centennial Resource Development Inc. hinted that $24 or $25 may be enough to prompt the driller to reverse at least some of its 40% output cut, though Chief Executive Officer Sean Smith declined to provide a specific trigger price.

“There’s a lot of factors that weigh into that, but you’ve got to have prices in the high-20s or low-30s before we kind of signal going back to work in an aggressive or even in a non-aggressive way,” Diamondback CEO Travis Stice said during a conference call with analysts Tuesday. “As we evolve as an industry into this new world order, I think it’s going to look a lot different than what we’ve historically been accustomed to.”

It’s not just so-called independent drillers that are prepared to discard production restraints when prices strengthen. Exxon Mobil Corp.’s strategy for curtailing supply while prices are low has been to turn off its newest, most prolific shale wells -- precisely so that crude can be reserved in the ground and unleashed as soon as markets recover. Unlike its rivals, though, the supermajor hasn’t disclosed any of its internal price levers.

Across U.S. and Canada, explorers are expected to turn off 3.5 million to 4.5 million barrels of daily crude output this month, including about 1 million in the Permian region, according to pipeline giant Plains All American Pipeline LP.

The curtailments have been so steep and swift that they derailed a movement in Texas to impose output limits for the first time in half a century. The proposal, which would have penalized drillers $1,000 a barrel for exceeding quotas, was abandoned by the Texas Railroad Commission on Tuesday, in part because so many wells already have been shut in.

Benchmark U.S. crude futures soared 56% in the past week and were hovering just below $24 a barrel at 10:22 a.m. on the New York Mercantile Exchange on Wednesday. Less than three weeks ago, the price dipped to minus $40.32 and even now remain more than 60% below the 2020 peak of $65.65 touched in early January.

“Prices have been below break-even for so long that it only made sense to stop drilling and shut in active wells,” said Christiane Baumeister, an associate professor of economics who specializes in the shale industry at the University of Notre Dame. “Those were the first logical steps to cutting production.”

The shale sector is in a unique position to upset the global supply-and-demand because the nature of the geology allows for the wells to be turned off and on in very short order. Whereas an old-style, conventional well can require months of careful handling and manipulation to bring back into service, shale wells in places like West Texas and North Dakota can be back online in as little as a week.

Parsley, which stood out among shale peers for being one of the few publicly traded explorers to support the ill-fated Texas quotas, said it would need one to two weeks to return wells to previous output levels.

“This is a choice,” CEO Matt Gallagher said during a conference call. “Currently the world does not need more of our product.”