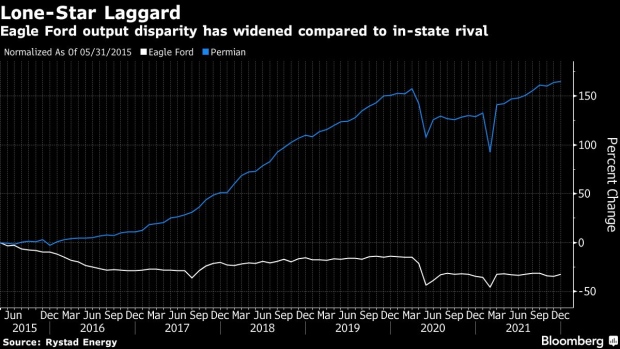 The silhouette of a pumpjack is seen in the Permian Basin near Orla, Texas, U.S., on Friday, March 2, 2018. Chevron, the world's third-largest publicly traded oil producer, is spending $3.3 billion this year in the Permian and an additional $1 billion in other shale basins. Its expansion will further bolster U.S. oil output, which already exceeds 10 million barrels a day, surpassing the record set in 1970. Photographer: Daniel Acker/Bloomberg , Bloomberg

(Bloomberg) -- The Eagle Ford Shale in South Texas, long dormant compared to its larger cousin the Permian Basin, saw its biggest one-week jump in drilling activity in more than two years as explorers look for growth beyond the world’s biggest shale patch.

The number of rigs drilling for crude in the Eagle Ford rose by 5 to 43 this week, according to Baker Hughes Co. data released Friday. It’s the biggest weekly expansion for explorers in the region since December 2019. Even gas-rich basins got in on the crude-drilling growth, adding the most oil rigs in at least half a decade with two more going to work in Louisiana’s Haynesville and one starting up in the Marcellus.

The shale industry is suffering from record costs in some of the biggest U.S. fields amid supply chain snarls, causing explorers to look beyond the Permian Basin of West Texas and New Mexico for growth. While the total U.S. rig count climbed by 11 rigs this week for its biggest gain in three months, the number of rigs working is still more than a quarter below pre-pandemic highs.