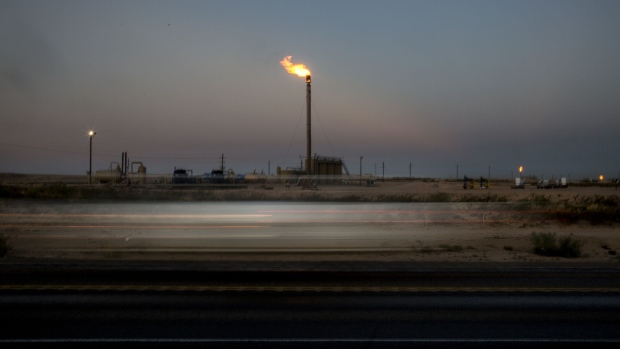 Gas flares stand in a field as light trails from a passing vehicle are seen on Highway 285 near Orla, Texas, U.S., on Saturday, Aug. 31, 2019. Natural gas futures headed for the longest streak of declines in more than seven years as U.S. shale production outruns demand and inflates stockpiles. Photographer: Bronte Wittpenn/Bloomberg , Bloomberg

The Frisco, Texas-based driller set its full-year 2022 budget at $750 million to $800 million, compared with $628 million a year earlier, according to a statement on Tuesday. The spending estimate exceeded every analyst’s estimate compiled by Bloomberg.

Comstock said it will focus on drilling in the Haynesville and Bossier shale formations in East Texas and Louisiana. Comstock expects to drill 67 wells and frack 69 horizontal wells using five to seven rigs in 2022. The shares climbed 1.4% in the minutes after the statement was released.

The company also posted an adjusted fourth-quarter profit of 37 cents a share that was short of expectations.