One of the biggest Texas shale explorers warned it will halt all drilling if the state imposes OPEC-style production caps, raising the stakes in a debate over a contentious proposal to arrest free-falling oil prices.

The stark pronouncement from Diamondback Energy Inc.’s finance chief stunned observers of Tuesday’s virtual hearing by the Texas Railroad Commission, which oversees oil output in the Lone Star state. At issue was whether the state should restrict crude output for the first time in roughly 50 years.

The proposal has deeply divided an industry already grappling with a global oversupply, escalating financial losses and the demand-killing COVID-19 outbreak.

Diamondback Chief Financial Officer Kaes Van’t Hof said the company already is in the process of shutting down 30% of its drilling and would take it to zero if the state clamps down on production. Such a move would have dire consequences in the form of lost jobs and disrupted families, he said.

In the event of quotas, “we’d let all our service providers go through the period of proration,” Van’t Hof said. “That turns that industry, the service industry, on to the same issues that the restaurant industry is facing today where they’re completely shut down with zero revenue and zero employment.”

On a practical note, Railroad Commissioner Christi Craddick wondered whether the agency even retains the expertise to enforce a statewide output limit. “We don’t even know how to do it any more,” she said.

Meanwhile, opponents of quotas insinuated that some drillers are supporting such restrictions for selfish reasons such as voiding contractual obligations.

A state order to curtail oil output would presumably provide drillers with justification to declare force majeure, the so-called “act of God” provision in contracts that relieves a party of liability for events outside their control.

The hearing began with executives from the biggest pro-quota companies: Pioneer Natural Resources Co. and Parsley Energy Inc. Chief executives from both firms urged the commission to cap production or risk deep and long-lasting damage to the industry and economy.

“Are they really trying to fix a problem?” Teague asked more than two hours into the marathon hearing. Oil explorers ensnared by the sudden slump in oil prices still must honor contracts with pipeline networks, storage operators and hard-hat contractors that drill and frack their wells. 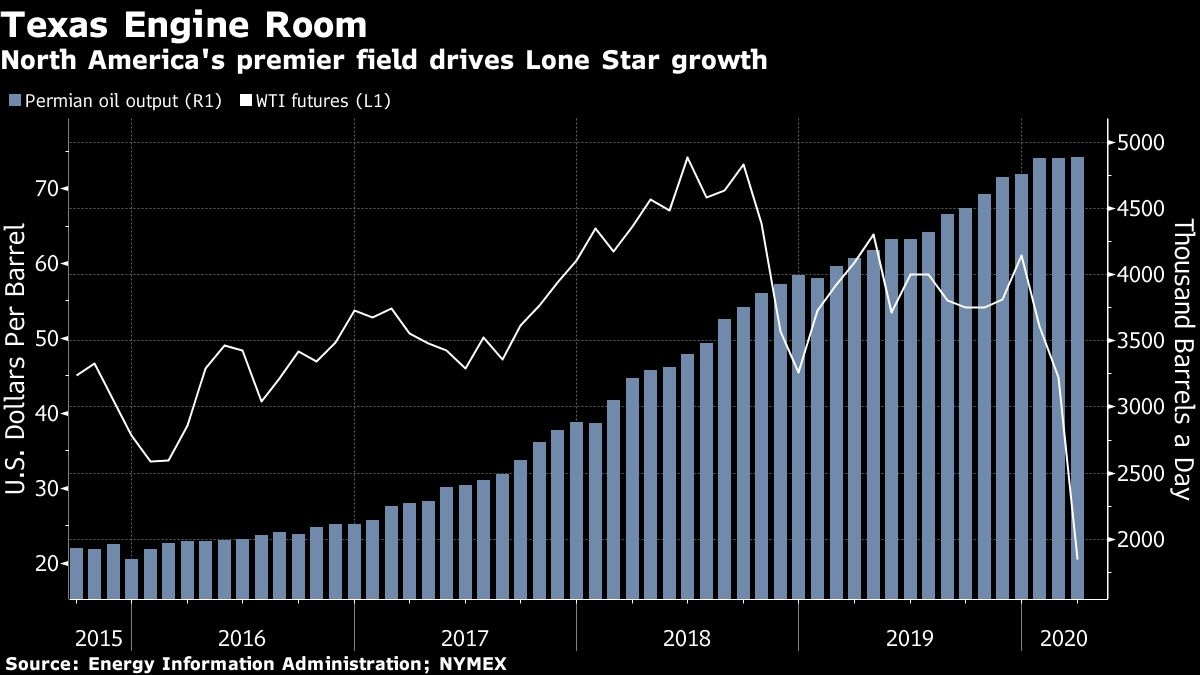 Pioneer didn’t immediately respond to a request for comment. CEO Scott Sheffield in a Friday interview said it’s “ridiculous” to suggest his company needs the cuts to survive, especially given its low level of debt and large hedging position.

Parsley supports quotas because they will soften “the blow to the U.S. oil and gas industry, saving oil and gas jobs, supporting our national security, and perpetuating the Texas miracle,” CEO Matt Gallagher said in an email.

Marathon’s Tillman warned that Texas caps would be unfair to companies that also drill in other states because it could force them to curtail output at fields that are more profitable than other parts of their portfolio. Pioneer and Parsley are focused almost exclusively on Texas drilling.

$MRO Tillman: “We do not believe proration in Texas will have the desired effect – or any meaningful effect – on global oversupply, and would only serve to disadvantage Texans.” @TXRRC #oilandgas #NoTxProration

Pioneer’s Sheffield told the three-person commission that mandatory cuts are needed to prevent large swathes of U.S. shale from going under. They could also be used as leverage to squeeze additional curbs from the Organization of Petroleum Exporting Countries and the Group of 20 nations.

Tillman and a bevy of anti-quota executive argued that such market intervention would create a dangerous precedent that would undermine the entire industry.

“The best solution to our current crisis is to get the world healthy and back to work while not abandoning the free market principles that have created U.S. energy independence,” Tillman said.

Sheffield has been the leading voice advocating for state-imposed cuts, even as the biggest players in the sector -- Exxon Mobil Corp. and Chevron Corp. -- staunchly oppose the proposal. Still, the fact that the idea is even on the table in a state that prides itself on self reliance and unhindered trade is a measure of the swift and startling plunge in oil prices.

At current prices, 80 per cent of the U.S. shale industry will go bankrupt, Sheffield estimated. Oil-storage capacity across the country will be full in a matter of weeks, and that will create a backup effect that will force drillers to shut wells, he said.

The OPEC+ agreement this past weekend to cut 9.7 million barrels of daily output won’t make a notable impact on prices given the stark impact the Covid-19 contagion is having on energy demand, Sheffield argued.

Texas should start with a 20 per cent cut, which would amount to more than 1 million barrels a day, he said. Parsley’s Gallagher agreed.

“If we slam into a train wreck at full speed at a peak rate that we can predict, then it’s going to be much worse,” Gallagher said.