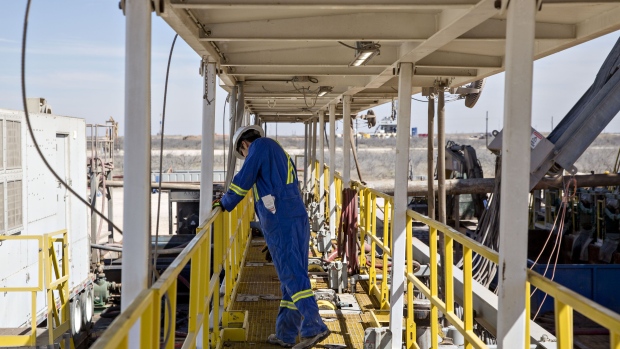 A roughneck walks on a Nabors Industries Ltd. drill rig as it is used to drill an oil well for Chevron Corp. in the Permian Basin near Midland, Texas, U.S., on Thursday, March 1, 2018. Chevron, the world's third-largest publicly traded oil producer, is spending $3.3 billion this year in the Permian and an additional $1 billion in other shale basins. Its expansion will further bolster U.S. oil output, which already exceeds 10 million barrels a day, surpassing the record set in 1970. Photographer: Daniel Acker/Bloomberg , Bloomberg

(Bloomberg) -- Roughneck job cuts accelerated in July and the outlook may worsen as new Covid-19 cases stifle economic activity, according to the Petroleum Equipment and Services Association.

The U.S. oilfield-services sector shed 9,344 jobs last month, a 43% increase from June’s losses, the industry-funded trade group said in a report released Monday. That pushed the industry’s total job casualties since the pandemic emerged to 99,253.

Texas, Louisiana, Oklahoma, Colorado and New Mexico were the hardest-hit regions for oilfield job cuts, according to the report, which crunched U.S. Bureau of Labor Statistics data with help from the University of Houston’s Hobby School of Public Affairs. Oilfield employment in American fields hasn’t been this low since March 2017.