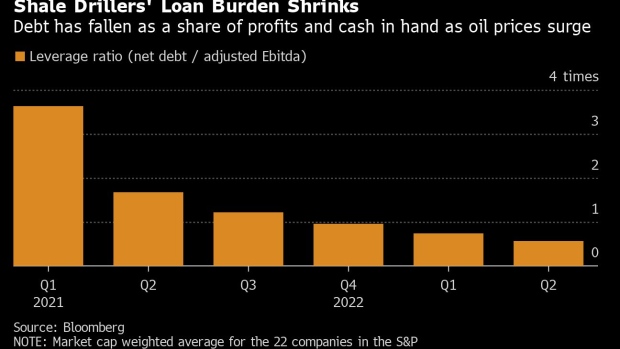 An employee monitors extracted oil shale being moved at the Viru Keemia Grupp AS (VKG) oil shale mine in Kohtla-Jarve, Estonia, on Tuesday, June 7, 2022. Oil hit a three-month intraday high on Monday amid rebounding demand from China and a significant tightening of the market following Russia’s invasion of Ukraine. , Bloomberg

A metric commonly used to measure companies’ ability to pay down their borrowings has widely improved among oil and gas producers as they repurchase some bonds and pile up cash amid ballooning profits. Net debt reported by a group of independent drillers including ConocoPhillips and Pioneer Natural Resources Co. averaged less than 0.6 time their annual earnings before items such as interest and taxes in the second quarter, down from roughly 1.7 time a year earlier, Bloomberg data show.

“Many E&Ps have reached, or are very quickly approaching, their debt target,” said Spencer Cutter, an analyst at Bloomberg Intelligence. “Energy companies have come a long way toward repairing and reinforcing their balance sheets and are in a much stronger position today to handle another downturn in commodity prices than they were going into the 2015 or 2020 crashes.”

Prior to the pandemic, shale companies were engines of production growth as investors plowed money into the sector. The onset of Covid decimated oil demand and cratered prices, forcing many companies either into bankruptcy or to shut in production. As demand recovers from the 2020 collapse, many shale drillers have responded cautiously, increasing output moderately and prioritizing shareholder returns.