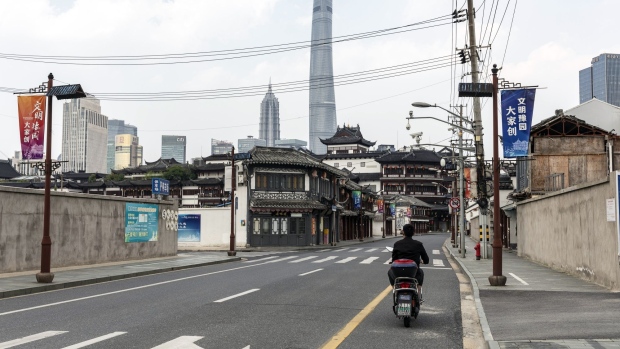 A motorist rides along a near-empty road during a lockdown due to Covid-19 in Shanghai, China, on Monday, May 16, 2022. Shanghai is on the brink of meeting the goal of three days of zero community transmission of Covid-19 that officials have said is required to start easing the harshest elements of the city’s punishing six-week lockdown. Bloomberg , Bloomberg

(Bloomberg) -- Shanghai is allowing more than 800 financial institutions to send employees back to the office under a closed-loop arrangement as China’s financial hub slowly emerges from an unprecedented shutdown of more than six weeks.

A total of 864 entities, including the city’s foreign exchange, stocks and futures bourses, are allowed to resume on-site operations, according to a white list notice dated Tuesday. State banks including Industrial and Commercial Bank of China Ltd. as well as the China offices of HSBC Holdings Plc, JPMorgan Chase & Co. and Fidelity International are among the first batch.

Shanghai, the epicenter of China’s worst outbreak since the early days of the pandemic, is gradually unwinding a punishing lockdown that confined its 25 million people to their compounds for weeks. Home to more than 1,600 banks and asset managers as well as one-quarter of China’s expatriate population, the city’s plight battered its image and raised doubts over its ambitions as a global financial center.

At least hundreds of traders, bankers and fund managers in Shanghai have been living in their offices since late March after employers rushed to call staff back ahead of the lockdown. Some of them have had no access to showers.

The latest development means more financial professionals could be asked to prepare to sleep on makeshift beds in offices, and potentially swapping out those who had been stationed there for almost two months. The white list will be updated on a weekly basis to add more firms.

Shanghai reported 855 Covid cases on Tuesday, with no infections found outside of government quarantine for a fourth day. Still, many restrictions remain in place and swaths of the city’s population are still largely stuck inside their compounds.

Banks must submit their list of employees needed for ensuring operations to local authorities for approval, before getting their work permits issued by the city’s big data center, according to the notice. Staff will then present the permits to local community officials along with negative rapid test results before being released from their neighborhood.