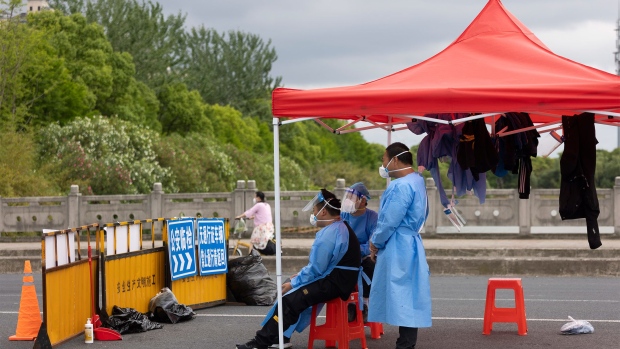 (Bloomberg) -- Shanghai has been officially easing a lockdown that kept its 25 million residents home-bound for nearly two months following declines in Covid-19 cases, but an army of zealous grassroots volunteers who police housing compounds are still banning many people from going outside.

Neighborhood committees around the city are imposing strict and arbitrary curbs on movement, including limits on who can leave their housing compounds and for how long, amid concerns about a rebound in cases. The rules are making simmering frustrations boil over as people push for freedoms that top city officials have promised, while local cadres fear repercussions if residents return with an infection.

Nearly 85% of Shanghai’s residents, or 21 million people, live in compounds or districts that are free of the virus, according to a tally released by the municipal government. These so-called ‘preventive’ areas were supposed to have the lowest level of movement restrictions, allowing them to leave their apartment complexes and walk around their neighborhoods.

For millions of people, that isn’t happening. According to about a dozen residents across the city, many are still facing a variety of restrictions from their local committees. In some cases, they can only venture 20 meters (66 feet), about the length of a bowling alley, from their apartment complexes.

The experiences suggest Shanghai’s path to exiting weeks of isolation will be bumpy, reflecting the challenges of a Covid Zero framework constantly at risk for a rebound in infections.

There are legions of neighborhood committees across China, ubiquitous grassroots organizations that function as coordinators of all sorts of government policies. They are responsible for everything from enforcing lockdowns to household registrations, and have been competing with one another to eradicate the virus from their jurisdictions.

In some areas of Shanghai, residents are restricted to 20 minute time slots three times a day to venture out, with distances limited to 20 meters. One committee in the eastern part of the city last week recognized the effort put forth to be deemed a ‘preventive area,’ and told residents the curbs were needed to limit risks from the surrounding areas.

Some aren’t allowed out at all. The authority of Minhang district in the city’s southwest banned people from leaving their homes or compounds between May 25 and 26, regardless their lockdown status, because another round of mass testing will be carried out, according to an official notice.

Elsewhere in the city, neighborhood committees restricted the number of family members that could leave their compounds, and put in place rules about the purpose and length of the trips. Some required households to share passes during designated time slots.

Another mandated that they could only be used once, with each building given a single pass. Trips were limited to shopping at a nearby Walmart Inc. store and could last only three hours.

The varied lockdown measures imposed by neighborhood committees suggest that low-level government officials, who work closely with them, are concerned that they’ll be punished if new cases pop up in their jurisdictions.

China has punished more than 4,000 officials for some 51 local Covid outbreaks, according to a Bloomberg analysis of data released by state media and party disciplinary authorities. Most of the more than 15 officials reprimanded over the Shanghai lockdown so far are low-ranking bureaucrats, with none exceeding a district-level rank.

The city’s vice major said last week that Shanghai aims to return to normal life and restore full production by mid-to-late June. On Sunday, officials laid out the criteria they will use to categorize Covid risk levels, part of the latest step authorities have taken to end the ordeal for its residents.

Overall, Shanghai is seeing its outbreak dwindle. There were 558 cases reported for Sunday, a decrease from 622 a day earlier, and none were found outside of government quarantine.

One woman, fed up with the restrictions, used a megaphone to urge her neighbors to “lift the lockdown by ourselves,” according to a widely circulated video on the WeChat social media app.

Another showed residents pouring out of their compound after government representatives listened to their complaints and unlocked the gates. Since none had been given a pass, however, they all took pictures and then went back inside.