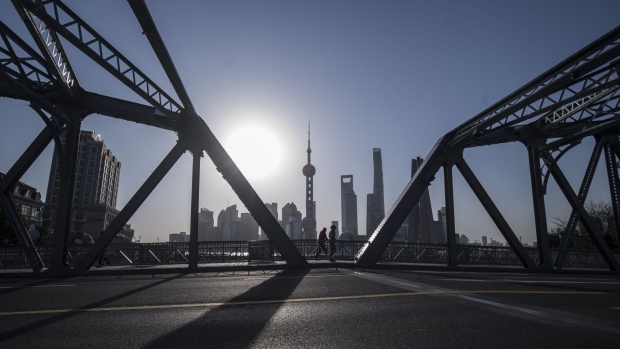 Pedestrians walks across a bridge as skyscrapers of the Pudong Lujiazui Financial District stand across the Huangpu River during sunrise in Shanghai, China, on Friday, March 20, 2020. Most of China is now considered low risk and should return to normal work and life, Premier Li Keqiang said at a government meeting on the coronavirus, which is spreading rapidly in Europe, the U.S. and elsewhere. Photographer: Qilai Shen/Bloomberg , Bloomberg

(Bloomberg) -- China’s financial hub Shanghai reported three Covid-19 local infections, just after the country had managed to quell the widest outbreak of the virus since it emerged two years ago.

Three residential blocks in Shanghai have been classified as medium risk areas, Wu Jinglei, director of the city’s health commission, said at a press conference late Thursday. The patients were found in the Pudong New Area and Qingpu district. The cases emerged right after China was seen to have almost fully eradicated the latest spread, reporting only two local cases nationwide earlier in the day, amid stepped up efforts to eliminate transmission of the virus.

The latest flare, the first in Shanghai in about three months’ time, stands to raise questions about whether China’s Covid Zero approach will be sustainable in the long run, as other stalwarts of the policy shift toward living with the virus as endemic. The world’s most populous country has taken extreme measures to curb the latest outbreak, which has been fueled by the highly contagious delta variant, including locking down cities and testing nearly 34,000 people at Shanghai Disneyland.

In Shanghai, the relevant living blocks are locked down for 14 days in light of the new cases, the government said. The authorities have put more than 100 possible contacts under quarantine and are testing almost another 11,000 people.

The three people who tested positive for the virus had all been fully vaccinated, and they are in stable condition. The government said it is also testing related people and locations.

The outbreak could become a major test for China’s most developed city, known for its nimble and sophisticated approach in handling past flareups, as the pathogen proves even harder to wipe out as winter temperatures bear down.

The cases “remind us that we should stay vigilant against the virus during the winter season,” Zhang Wenhong, an infectious disease specialist in Shanghai said at the briefing.