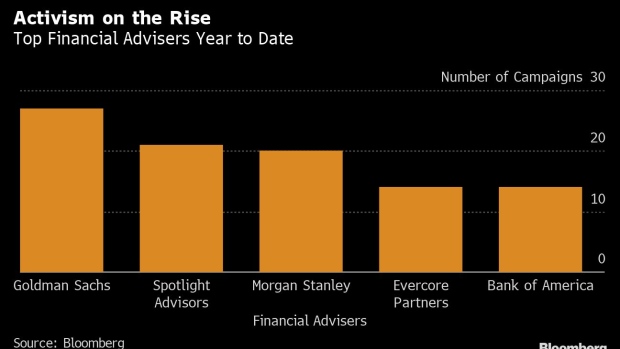 (Bloomberg) -- Shareholder activists, fresh from stepping up their campaigns by a third in the first half of the year, are expected to be emboldened by an economic rebound for the rest of 2021.

The total number of activist campaigns launched through June 21 at companies with a market value of more than $1 billion reached 116, up from 87 over the same period in 2020 and 115 in 2019, according to data compiled by Bloomberg.

The first six months of the year marked a rebound in activism generally as the economy started to recover from the pandemic. Advisers expect that momentum to continue into the second half of the year and into 2022 and beyond.

This year’s proxy season will largely be remembered for the unexpected victory of first-time activist Engine No. 1 over Exxon Mobil Corp. and the lift it gave to activist investors focused on environmental, social and governance issues. The little-known fund managed to win three seats on the board of the oil and gas giant despite owning only a 0.02% stake.

It’s something other companies will need to take heed of heading into next proxy season, said David Rosewater, Morgan Stanley’s global head of shareholder activism and corporate defense. ESG issues are now at the forefront of a lot of campaigns, and front of mind for a lot of investors, he said.

“It is certainly a reminder for companies that whatever is important to shareholders, needs to be important to them,” Rosewater said in an interview.

Some aren’t convinced the Exxon fight was a watershed moment for ESG activism. What made Exxon vulnerable was that based on its financial performance, it was a more traditional activism target and ESG wasn’t necessarily the deciding factor, said Patrick Gadson, co-head of the shareholder activism practice at law firm Vinson & Elkins.

Engine No. 1’s chances were bolstered by a strong group of candidates that brought green energy and operational experience to the board, said Scott Winter, managing director at Innisfree M&A Inc., the leading proxy solicitor in the first half of the year, who worked with the activist fund.

Exxon’s big investors, including BlackRock Inc., Vanguard Group and State Street Corp., all partially supported Engine No. 1’s nominees, Bloomberg News previously reported. Exxon’s investors spent a great deal of time with Engine No. 1 and its candidates to review their concerns about about its financial performance and environmental targets, he said. But the activist’s success might not be so easy to replicate.

“I think what everyone is going to find is that it’s not easy to do what Engine No. 1 did,” Winter said. “They found the right target, and the right slate, and they put together a great platform.”

The pandemic heightened tensions between companies and activist shareholders, according to Elizabeth Gonzalez-Sussman, a partner at Olshan Frome Wolosky, the leading legal adviser to activists in the first half.

Companies so far this year have tended to believe they navigated the pandemic well, and have momentum going into the back half of the year, she said. The activists, on the other hand, have focused on their track records prior to the outbreak. The result is that a lot of fights that should have settled early, didn’t, which created a big disconnect, she said.

“That’s what was creating this surprise on the company side and frustration on the investor side,” Gonzalez-Sussman said.

The fights that were settled at the 11th hour came down to the quality of the candidates, she said. This has both sides in boardroom battles “hyper-focused” on the quality of their slate, she said, adding that candidates will have skill sets that address a myriad of issues, from operations to ESG.

Looking forward, Winter said he expects to see a lot of activity by mainstream activists such as Starboard Value and Elliott Investment Management. He expects the trend of activists getting in the middle of mergers and acquisitions to continue, with dealmaking on track for record levels.

Gadson of Vinson & Elkins said he expects, at some point, the social element of ESG investing will become more prominent in boardroom battles. That means “cancel culture” will play a bigger role in activist campaigns, the vetting of directors and the selection of management teams because younger consumers simply won’t buy products that don’t align with their values.

“Woke culture of the 60s was marching and canceling public busing systems. That has real, long-standing consequences and changes. I think we should be paying attention to this,” he said.