Minority shareholders in Canada scored major victories in the voting booth this week, thwarting bids to take Hudson’s Bay Co. and Canfor Corp. private. Too bad the proxy wins have done nothing for the share prices.

Canfor, the lumber company controlled by one of Canada’s richest men, tumbled the most on record Tuesday, after minority shareholders voted against the $16-a-share offer. The stock traded at $13.19 in Toronto, after the Jim Pattison Group said it has no plans to raise the bid.

It’s a similar story at Hudson’s Bay, where a group led by Chairman Richard Baker signaled on the weekend it may scrap its offer of $10.30 a share after minority investors led by Catalyst Capital Group Inc. said the bid undervalues the company. The Catalyst win has done little for the stock which is trading at about $8.70, or 15 per cent below the Baker offer and well off Catalyst’s own proposal at $11.

The stock declines underscore the risk that minority shareholders take when they oppose a takeover offer, even if they think it’s a low-ball bid. There’s no guarantee a proxy win will spark a sweetened offer, sometimes resulting in more pain, not less. 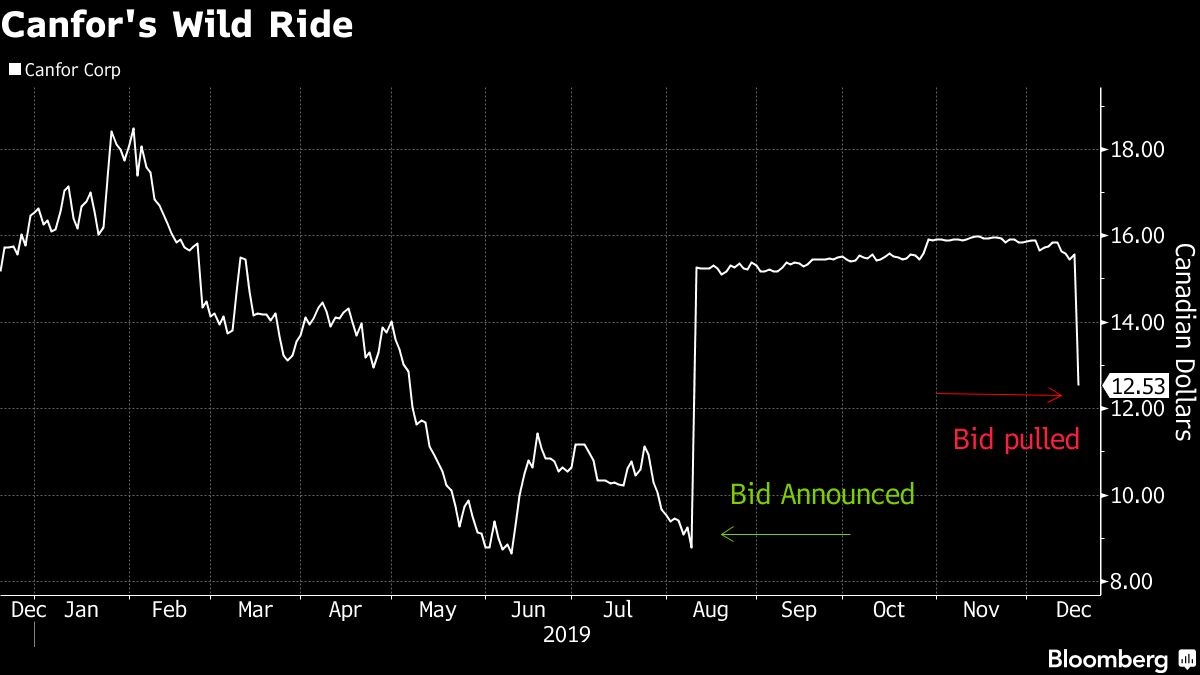 Jim Pattison’s bid was “financial, not strategic,” Gareth Watson, director and wealth adviser at Richardson GMP, said in an interview on BNN Bloomberg television. Pattison, whose conglomerate includes media assets, grocery stores and John Deere dealerships, saw an opportunity to capitalize on a depressed stock -- off more than half from February to its August low -- to take out the 49% of shares he doesn’t already own.

“Jim Pattison didn’t become a billionaire by overpaying for companies,” so he doesn’t mind walking away, Watson said.

Similarly, Hudson’s Bay has been a bit of a train wreck of an investment in the last four years, tumbling 70 per cent as the department store chain loses ground to online shopping. Still, the Baker bid was almost a 50-per-cent premium to the stock price in June when Baker made his initial offer. And the group has already boosted the bid once, to $10.30 from $9.45.

Not good enough said Catalyst and crew, who not only voted against the offer, but appealed to the Ontario Securities Commission to delay the vote and demand a more fulsome takeover disclosure. The OSC agreed, landing Catalyst another win, with the regulators at least, if not on the stock exchange.

The Hudson’s Bay saga may not be over yet. The Baker group hasn’t made a final decision on the offer, even though it told advisers to go “pens down” and stop working on the deal. There is a chance the group may offer a higher price, even if few investors in the market are willing to make that bet. The stock was up 0.5 per cent to $8.70 at 10:30 a.m. in Toronto.

“They, collectively, may come back with another offer to try to take the company private — are they done? I don’t think so,” Bloomberg Intelligence analyst Poonam Goyal said of the group. “They just have to come up with a better price that makes sense for shareholders too.”

For Greg Taylor at Purpose Investments, the short-term pain is a fair price to pay for potential long- term gains and improved governance. Too often, minority shareholders get run over in these deals, he said.

“In the short term, yes it’s going to be more painful” Taylor said. “But if you do really believe that this wasn’t a fair price,” then it’s worth the wait to hold on for a better reward.