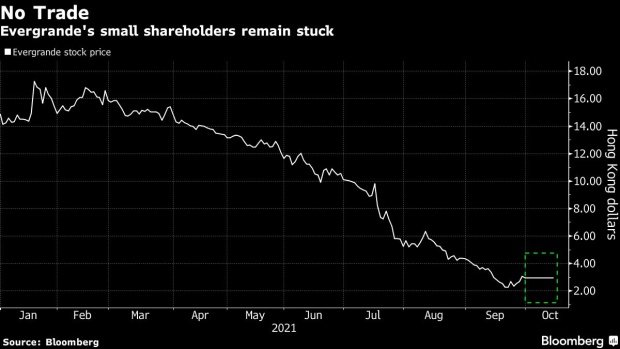 (Bloomberg) -- China Evergrande Group is set to resume trading Thursday after the cash-strapped developer terminated discussions to sell its property-management arm, a deal that would have given it a major cash infusion.

Evergrande ended talks last week to sell 50.1% of its stock in Evergrande Property Services Group Ltd. for about HK$20 billion ($2.6 billion). The developer disclosed the latest developments in a filing with the Hong Kong stock exchange Wednesday.

The potential acquirer, Hopson Development Holdings Ltd., said in its own statement that it “regrets to announce that the vendor has failed to complete the sale” of the Evergrande Property Services stake, and asked for its shares to also resume trading.

Trading in China Evergrande, Hopson and Evergrande Property Services had been suspended since the start of the month pending an announcement of a major transaction. Evergrande’s shares had swung wildly before the halt, tumbling 80% this year. The shares offer “no value” without the sale, said Justin Tang, the head of Asian research at United First Partners in Singapore.

Chinese Estates Holdings Ltd., controlled by a long-time backer of embattled developer Evergrande, sold senior notes of Kaisa Group at a HK$225.9 million ($29.1 million) loss, the company said in a stock exchange filing. The transaction provides immediate liquidity and allows it to re-allocate proceeds for other reinvestment opportunities, it said.

Modern Land says it continues to experience liquidity issues and won’t seek permission from debt holders to delay repaying a $250 million bond. The property developer said it’s in discussions with prospective independent financial advisers to assist with assessing the company’s capital structure, liquidity profile, operating and financial condition, “with a view to achieving a feasible solution to its current liquidity issues.”

Evergrande said it ended talks last week to sell 50.1% of its shares in Evergrande Property Services Group Ltd. for about HK$20 billion ($2.6 billion), according to a filing with the Hong Kong stock exchange Wednesday. It had been negotiating to sell a majority stake in the property-management arm to Hopson Development Holdings Ltd.

Hopson said in a separate statement that it “regrets to announce that the vendor has failed to complete the sale” of the stake, and asked for its shares to also resume trading.